KELOWNA, British Columbia – On the heels of unveiling an expansion of its brick-and-mortar presence in Atlantic Canada, Leon’s Furniture Limited (LFL) has opened its first Leon’s banner store in this city’s Orchard Park Shopping Centre while announcing its is set to open that network’s second corporate store in Calgary sometime this month.

This country’s largest full-line furniture retailer, LFL opened two new stores operating under The Brick banner in New Brunswick while relocating its Charlottetown location and announcing it will add another later this year in St. John’s, Newfoundland.

In a statement, the publicly held merchant said it was excited to expand its presence across the country as many other retailers are choosing to downsize their physical footprints. 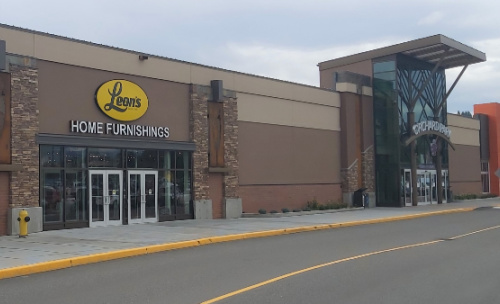 The Kelowna location – which is the banner’s sixth in B.C. and only the second Leon’s store to be in a shopping centre (the other being in Beauport, Quebec) – spans 20,000 square feet. “Orchard Park mall remains one of the biggest shopping destinations within the B.C, interior,” LFL told Home Goods Online when asked why it choose to put this store in a shopping centre. “We are also still relatively new to the B.C. market, so it was important for us to be in a high traffic location to better expose our brand.”

In addition to being the second in the city, the new Calgary store will cover 50,000 square feet and will be the banner’s seventh in Alberta, including franchises in Medicine Hat and Red Deer.

“Our Calgary store will be a hybrid between our traditional showrooms and our new ‘smart store’ concepts,” LFL told HGO. “We will be able to showroom much more product within this store but will also include our video wall, iPads and touch screens for expanded assortment.”

A company spokesman said Leon’s management team is pleased with how the ‘smart store’ concept has developed since the first was opened in Coquitlam last August. “We’re noticing strong engagement rates from our customers and the percentage of sales coming from product not physically showroomed in Coquitlam is higher than anticipated,” he said. “Leveraging technology to bring a broader assortment to a smaller footprint has been well received by our customers and associates.” 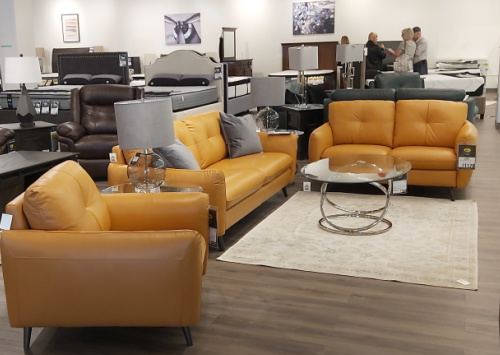 Since the onset of the COVID-19 pandemic, the retailer has seen a number of evolving consumer trends such as the need for additional food storage solutions with refrigerators and freezers; a higher demand for functional home office furniture; and, a greater need for patio furniture for customers eager to improve their outdoor living spaces.

“Canadians are now spending more time in their homes than ever before,” said Mike Walsh, president of the Leon’s division of LFL. “While it has been a challenging time for all Canadian retailers, we feel very fortunate to continue to provide our customers with the furniture and appliances that help make their house a home.”

While the retailer relied heavily on its various e-commerce platforms when its stores from coast-to-coast were temporarily closed during the height of the pandemic – which included the addition of a new online customer service team and a live chat feature on their web sites – looking forward LFL believes brick-and-mortar remains critical important to its ongoing growth in sales, profit and market share.

“We feel that brick and mortar locations for our industry is still important as many customers still feel more comfortable trying the product before making a material investment in their home,” their spokesman told HGO. “We also feel that, with the strength of both our brand and our financial position, we are poised to grow our market share during challenging times. We know many customers start their journey online, so it is a balance to focus on the entire omnichannel as well to ensure the best customer experience.”

Despite the many hardships it has caused, over the long term the pandemic may cause a shift in consumer focus over the coming few months which will benefit furniture, mattress and appliance retailers.

“Customers are spending more time in their homes and may be for the foreseeable future. We anticipate travel being restricted throughout 2020 and possibly into the first part of next year so Canadians will be spending more of their disposable income on making their homes comfortable,” LFL’s spokesman told HGO. “We feel that Leon’s is primed to benefit from this situation as we offer Canadians a balance of comfort, style, service and value.”

The two new stores will bring the Leon’s national store count to 54 with an additional 34 franchise locations. The company said it is continuing to look for additional expansion opportunities – particularly in B.C. – but no firm decisions have been made.

In addition to Leon’s, LFL operates four other banners, with a total of 305 stores, including Appliance Canada, The Brick, Brick Outlet and Brick Mattress Store. It also operates three e-commerce sites: leons.ca, thebrick.com and furniture.ca.