CALGARY – Leon’s Furniture Limited (LFL) has opened its second Leon’s bannered store here in Alberta’s largest city. A hybrid between its smaller scaled smart store and its traditional full-size corporate store it will become the model on which all future stores built by this country’s largest full-line furniture retailer will be based.

Located in the CrossIron district in the northern part of the city, the new Calgary store will cover 50,000 square feet. In addition to being Calgary’s second Leon’s location, it will be the banner’s seventh in Alberta, including franchises in Medicine Hat and Red Deer. 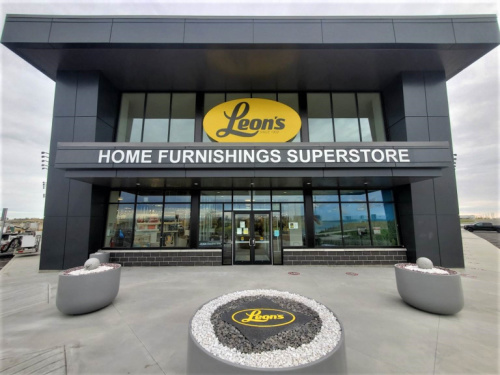 “Our Calgary store will be a hybrid between our traditional showrooms and our new ‘smart store’ concepts,” LFL told Home Goods Online when the company opened its first Leon’s store in Kelowna, British Columbia a few weeks ago. “We will be able to showroom much more product within this store but will also include our video wall, iPads and touch screens for expanded assortment.”

LFL chief executive officer Ed Leon is enthusiastic about the design of the new Calgary. “It’s definitely new and that’s by choice,” he told HGO, adding the company worked closely with its architects – the Toronto-based Turner Fleischer – diligently over the course of several months having come to the conclusion their design approach needed updating. “It definitely speaks to our more recent branding strategy to become more current.”

Alberta’s economy has been struggling in recent years, thanks almost exclusively to the downturn in the world price for oil and while LFL is aware of the conditions in the province its also been sitting on the land on which the store is built for the past ten years. “The combination growth in the suburbs and our overall strength made this timely,” Leon said.

“The immediate capital investment in the building is in excess of $10 million,” Leon continued, adding, “but the exciting part is we intend to add another 50,000 square feet on the property of complementary retail and services when the interest justifies it.”

In addition to the two Leon’s banner stores LFL has opened in recent weeks, its Brick banner has been busy in Atlantic Canada, opening two new corporate stores in New Brunswick and relocating its store in Charlottetown. It also intends to open another in St. John’s, Newfoundland before the year is over.

LFL is expected to announce its results for the third quarter and year-to-date 2020 sometime this week.