BRIDGEWATER, Nova Scotia – The Leon’s Furniture store franchise here, and its companion store in Coldbrook, closed suddenly and without explanation last week, both CBC News and the Halifax Chronicle Herald are reporting.

Bridgewater is located on the province’s south coast, along the Atlantic Ocean while Coldbrook is on the north shore, along the Bay of Fundy.

Both news outlets also contacted parent company Leon’s Furniture Limited (LFL) which noted both were independently owned and operated. “And as such, we can’t speak to the reason for the closure,” LFL said in an e-mailed statement, although the company added it will be serving customers out of its corporate store in Dartmouth. 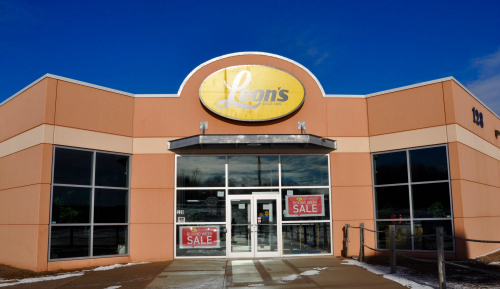 As of 30 September 2018, the end of LFL’s fiscal third quarter, the company operated a total of 100 franchise stores across the country – 36 under the Leon’s banner.

Frequently, the franchises are the star performers with higher sales gains than their corporate cousins. For the 2018 third quarter, franchise store revenue was up 3.3% to $114.7 million and for the year-to-date were $321.3 million, up 7.3% from $299.5 million for the same period the year before.

The Coldbrook store was opened in 2011 by owners John Coady and Colin Lewis, who relocated the unit and its 22 employees from Kentville. It’s not known if they own both shuttered locations.

There are two other Leon’s bannered stores Nova Scotia in addition to Dartsmouth located in Yarmouth and Truro. LFL’s other banner – The Brick – doesn’t have any stores in the province.

According to Statistics Canada, there were 83 furniture stores operating in Nova Scotia at the end of June 2018 – down from 85 at the end of December 2017.