TORONTO – According to the Commission for Environmental Cooperation (CEC), Canadians are among the largest wasters of food in North America, with approximately 873 pounds wasted per person every year. This fact provided the motivation for Canadian chef, restaurateur and television personality Chuck Hughes to team with LG Electronics Canada (LG) to reduce food waste in Canadian kitchens.

According to Hughes – star of Food Network’s Chuck’s Day Off and co-owner of two well-known restaurants in downtown Montreal, including Garde Manger – one solution to Canadian food waste is Canadians themselves and the quick fixes they can use in their own kitchens.

In honour of Stop Food Waste Day – held this year on 27 April – LG and Hughes launched the LG Continuous Kitchen video series where the chef demonstrates how to extend the life of the family groceries and avoid unnecessary food waste. The goal is to help alleviate the approximately 13 million tons of food wasted in Canada per year. Throughout the series, Hughes shows, for example, how a classic Sunday dinner like roast chicken and vegetables can make multiple meals – reducing food waste with the right recipes and kitchen innovations. 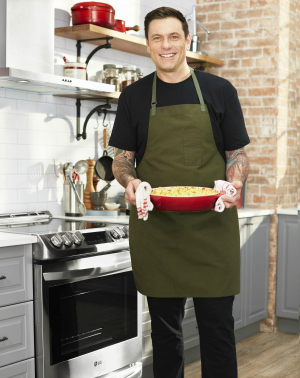 “People often ask me how to use foods in their entirety, as well as keep leftovers in a safe way – and as a restaurateur, this is a very important part of the business,” said Hughes. “These videos will give you great at-home tools to help you maximise the use of your groceries, reduce food waste and keep more money in your pocket.”

In his role as ambassador of the LG Continuous Kitchen, Hughes will share his culinary insights and pro-cooking tips with at-home chefs across Canada. He will be conducting several media appearances and will be starring in videos shared weekly on www.LG.ca/ContinuousKitchen, featuring all the newest LG kitchen appliances: LG InstaView door-in-door refrigerators, LG QuadWash dishwashers, LG ProBake convection ranges and the LG SmartThinQ technology that connects them all.

“More and more Canadians are considering their impact on the environment when making purchasing decisions. Even purchasing large appliances can be a step in the right direction,” says David Oyagi, LG brand manager of home appliances. “For example, the LG InstaView door-in-door refrigerator with ColdSaver panel significantly reduces cold air loss. More cold air means more peace of mind that food will stay fresher for longer.”

As part of its campaign to reduce food waste, LG notes refrigeration technology has come a long way, but it has some limits. Hot outside temperatures can cause food to spoil quickly, even when stored in a fridge. To help avoid spoilage, the company advises consumers to look for refrigerators that are insulated from fluctuating ambient temperatures and have safety measures in place to keep the interior temperature of the refrigerator stable.

It said its InstaView refrigerators are equipped with ‘inverter linear compressor’ technology which helps to regulate temperatures inside the fridge. The main indicator of freshness is constant and even cooling temperatures at all times. It also reduces energy consumption by streamlining mechanical operations.

It also maintains the InstaView door-in-door refrigerator with ColdSaver technology is built to reduce cold air loss by up to 47% (compared to a French door model), and its CustomChill drawers create their own temperature environment to keep food fresher longer.