TORONTO – This country’s largest home furnishings retailer will see a change of leadership this coming Canada Day as Edward Leon will retire as chief executive officer of Leon’s Furniture Limited (LFL) to be succeeded by Mike Walsh. The retailer also announced record sales and earnings for the first quarter of 2021.

Eddie Leon, as he is more familiarly known, has been with the publicly held and family managed company for the past 45 years and was named LFL president and chief operating officer in May 2015 after serving as vice president of merchandising for its Leon’s banner. He took on the CEO’s role in 2017 and will continue to serve as member of LFL’s board of directors.

Walsh was named president of the Leon’s banner in May 2015 and joining the company from Canadian Tire Corporation, where he served as a senior vice president of store operations. He was named LFL’s president and chief operating officer last September. 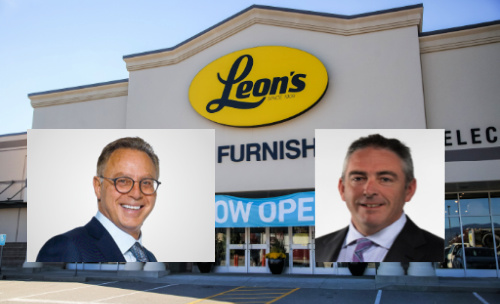 While specific dollar figures weren’t given in its report to shareholders, LFL noted e-commerce sales grew 374% in the first quarter, continuing the triple digit growth its online store has seen since the beginning of the COVID-19 pandemic. Analysts estimate LFL’s online activities accounted for roughly 22% of revenue in the first quarter or about $125 million. For the first quarter of 2020, the estimate is 16% of sales or about $75.6 million.

“The consistent and dedicated efforts of our national team generated strong financial results through the first quarter, in what continues to be a challenging environment for consumers and retailers across the country,” LFL CEO Edward Leon said in a statement.

Looking ahead, Leon noted that while the duration and full financial impact of the pandemic remain unknown, he’s confident the company is well positioned.

"We still believe that the underlying Canadian economy remains relatively strong,” he told shareholders. “Although it is difficult to gauge future consumer confidence and what impact it may have on retail, we remain cautiously optimistic that our sales and profitability will increase.”

During the first quarter, LFL closed one of its Brick Outlet stores, bringing its total store count down to 303, operating under five banners including Leon’s, The Brick, Appliance Canada, Brick Mattress Store and Brick Outlet.