According to the company, the six-time MLB All-Star pursued the investment after sleeping on, and falling in love with, the Endy Mattress while playing in Toronto. Bautista, an athlete, investor, and philanthropist, knew he had to get involved when he learned more about its mission: to help Canadians get a better night's sleep, including those who need it most. 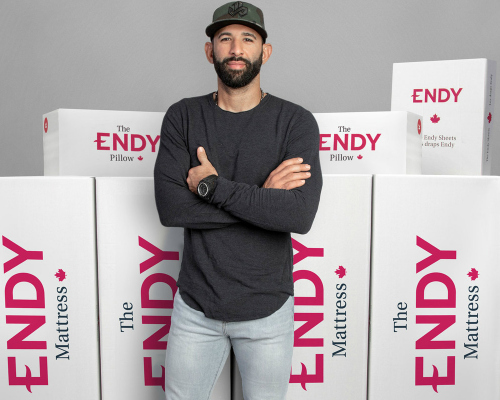 “Endy is an incredible Canadian success story. This is a company that continues to make a name for itself, not only for flipping an industry on its head, but for donating thousands of mattresses to those in need,” Bautista said. “As an athlete, I know how vital sleep is for overall health, and how a game changing mattress is essential for a great night’s sleep. As an investor, I'm proud to team up with Endy, a company whose values I share: innovation, well-being, and paying it forward.”

“We're thrilled to welcome Jose Bautista to the Endy family,” Rajen Ruparell, Endy co-founder and chairman, added. “Jose’s passion for our products and our mission make him a perfect fit for Endy, as we continue our growth trajectory as one of Canada's fastest growing companies.”

Since its launch, Endy has partnered with local charities from coast-to-coast to donate new and gently used mattresses to families and individuals in need. Endy has distributed more than 2,000 mattresses through its charity partners in every Canadian province, including Furniture Bank (Toronto), Matthew House (Ottawa), Women in Need Society (Calgary), Aboriginal Mother Centre Society (Vancouver), and more.

The company also has a rich track record of supporting global charitable organisations, including Nothing But Nets and the Bautista Family Education Fund, which provides assistance to student athletes, both on and off the field.

Endy claims to be one of Canada’s fastest-growing vertical e-commerce companies and market leader in the online mattress category with annual sales expected to surpass $50 million in 2018. The brand exclusively sells in Canada through its online storefront, endy.com.

Prior to Bautista, Endy said it has taken no external investment despite significant interest in the company. However, attracting celebrity investors is not exactly unheard of in the increasingly crowded e-commerce mattress sphere. The New York-based Casper, which recently opened its first Canadian store in this city’s Sherway Gardens and is expected to soon announce a second store in downtown Toronto, also has celebrity backers including Leonardo DiCaprio, Tobey Maguire, Adam Levine and Ashton Kutcher.

Earlier this summer, the company announced it would bring a second distribution center online – this one in the Vancouver suburb of Langley to serve customers in Western Canada.

Launched in 2015 by Gettis and Ruparell, the company manufacturers the Endy Mattress in Montreal and offers free shipping to customers from coast-to-coast. It has also added, pillows, sheets and mattress protectors to its product offerings.