Jim Estill named EY Entrepreneur of the Year for Ontario

TORONTO – Jim Estill, owner and chief executive officer of Danby Appliances, this country’s sole remaining white goods manufacturer, has been named the 2019 EY Entrepreneur of the Year for the province of Ontario.

In a statement announcing the honour, the Toronto-based office of the international accounting and consulting firm noted Jim Estill started reselling computers out of the trunk of his car before going on to build multiple profitable companies and investing in over 150 technology start-ups. He purchased Danby, a 70-year old business based in Guelph that makes everything from washing machines and dishwashers to fridges and air conditioners, in 2017. His creativity and innovative thinking completely revitalized the company in less than three years. 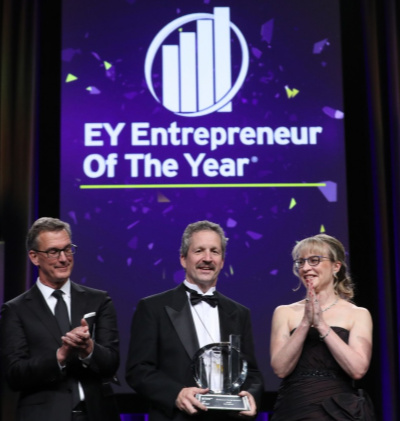 “Jim is the definition of an unstoppable entrepreneur – he fearlessly experiments with new ventures while never losing sound business judgement in evaluating new opportunities,” said Craig Roskos, EY Entrepreneur of the Year Ontario program co-director. “He understood every risk and took immediate action to eliminate unprofitable channels to lay the groundwork for Danby’s future growth and success, leading to a sky-rocketing spike in Canadian revenues.”

EY also praised Estill as a serial innovator and tech entrepreneur, saying he leads by example to encourage employees to think differently and experiment with products and processes. That’s led to breakthrough inventions like Parcel Guard – the first smart mailbox to hit the market – and ShipperBee – an environmentally friendly way to ship packages. His use of e-commerce and smart home products is propelling Danby to strong revenue growth.

“Jim took a traditional company that makes ‘big metal boxes’ and turned it into an innovative business that’s revolutionizing the industry,” added Paula Smith, co-director for the Ontario EY Entrepreneur of the Year program. “It speaks volumes to the entrepreneurial and creative culture that he enables within the organization.”

She added Jim Estill’s belief in doing the right thing for his company, community and around the world led Danby to become the first Canadian business to obtain a Sponsorship Agreement Holder designation from the Government of Canada to help resettle refugees moving to the country. He approached this philanthropic venture like a business, hiring refugees on to prepare them for joining the Canadian workforce. These efforts, Jim’s commitment to local charities and his engaged leadership style, all make up the Canadian DNA of Danby.

Before taking the overall honour for Ontario, he was the winner in the program’s business-to-consumer products and services category.

Danby was also honoured with the Diversity and Inclusion Award by the Ontario Chamber of Commerce in early November.