BURLINGTON, Ontario – IKEA Canada has opened its new distribution centre in the neighbouring city of Mississauga as part of its new growth strategy to double its sales over the next decade. The facility was built not only to support its four full-size stores in the Greater Toronto Area but its new pick-up points and e-commerce store as well.

The company said the 397,000 square foot facility will boast an improved logistical set-up that should shorten lead times for customers to receive their products while at the same time contributing to IKEA's sustainability goals. It will also create 200 new jobs.

“It is an exciting time for IKEA in Canada as we become even closer to our customers than ever before, today’s grand opening is the first step in truly transforming IKEA into a true multi-functional retailer,” Stefan Sjöstrand, president of the Canadian arm of the global home furnishings giant said. 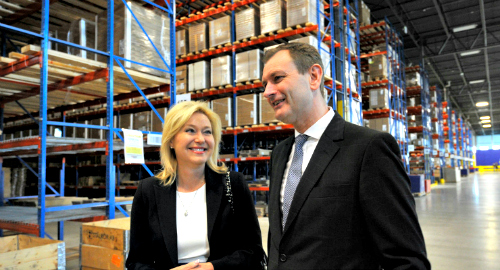 In addition to an improved e-commerce interface for its web site, the plan to date also included the announcement this past January that IKEA will open its 13th full-size store in Halifax sometime in late 2017. It will also be the retailer's only store in Atlantic Canada.

Over the past few months, it has opened pick-up points – small-scale stores where customers can pick-up goods ordered via the web site or catalogue – in the St. Catharines, London and Whitby, Ontario as well as Quebec City. It will open two more in the Ontario cities of Kitchener and Windsor over the coming months.

The Mississauga distribution centre will eventually be home to 200 new co-workers. Currently, the unit has 115 co-workers and is looking to hire another 85. Jobs at the facility are available in a variety of functions including human resources, operations, warehouse management and logistics.

“At IKEA, sustainability is integrated into much of what we do and we are continually working on reducing the number of journeys that our transport vehicles have to make, which is why we are opening this distribution centre in the Greater Toronto Area and bringing IKEA closer to our customers,” Sjöstrand said.