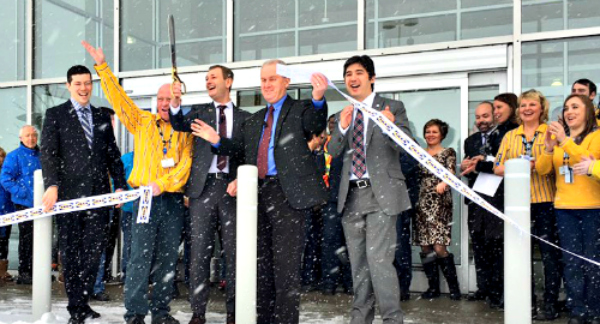 WHITBY, Ontario – IKEA Canada took the next step in its ten-year plan to double its size with the opening of its latest pick-up and order point at the Thickson Ridge Power Centre here earlier today.

Announced a year ago with the first two pick-up and order point locations – in London, Ontario and Quebec City – opening this past December.

When unveiling the project, IKEA Canada said its goal was to make its product assortment even more accessible to consumers across the country. The pick-up points are precisely that, places where consumers can pick-up orders made either online or at an IKEA store.

At 33,303 square feet and the third to open so far, the Whitby location also offers support services, computer stations for browsing and shopping as well as home furnishings inspiration area and a selection of the retailer’s most popular items for immediate takeaway. The company also believes customers living in and around Whitby – which is just east of Toronto – will see delivery costs fall significantly.

The recently announced pick-up points for the Ontario cities of Kitchener and Windsor are expected to open sometime this spring while that for St. Catharines will open later in the year.

In late January, IKEA announced it will open its 13th full-size store in Halifax, Nova Scotia. The company expects to break ground sometime this summer and is looking to open in late 2017.

IKEA Canada is also looking to double its sales from the $1.79 billion it took in for the fiscal year that ended last August over the next decade.

These smaller-format pick-up and order point location stores – which are about one-tenth the size of a full-size IKEA store – are part of a global test being conducted by the Swedish home furnishings giant which is placing them in markets where it currently doesn’t operate any stores. It’s interesting to note these smaller-format IKEA pick-up points are larger than most traditional furniture, mattress and major appliance stores in Canada.

“IKEA’s growth through pick-up and order points in Canada is a crucial part of our business and allows Canadians to have increased accessibility to our products,” said IKEA Canada president Stefan Sjöstrand. “The pick-up and order points are allowing IKEA to expand quickly into markets that have been identified as having potential, resulting in IKEA becoming more accessible to Canadians.”

IKEA has hired 36 co-workers to support the new pick-up and order point.