QUEBEC CITY – A crowd estimated at 4,000 waited for most of the previous night and in the midst of downpour for IKEA Canada to open its 14th full-size store here, part of its plan to double in size over the decade ending in 2015.

“Today’s opening represents a long-term investment for IKEA in the local Quebec community. We have built an inspiring, locally-relevant store, created hundreds of new jobs and continue to activate our vision to create a better everyday life for the many people through our sustainability and corporate initiatives,” IKEA Canada president Marsha Smith said in a statement. “It's truly an exciting day for IKEA Canada.” 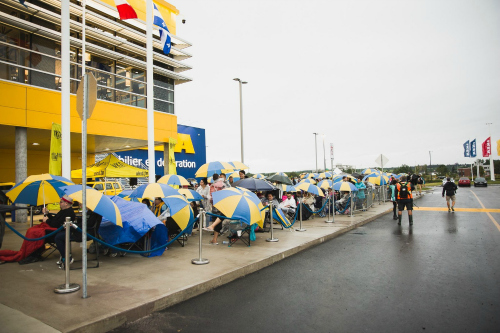 The family-friendly opening ceremonies for the 340,000 square foot store kicked off at 6am and featured local musical entertainment, circus performers, treats from IKEA’s Swedish Food Market and over $10,000 in prizes for customers in line.

The official part of the day included store manager Annika Lenoir and a bevy of local, provincial and federal politicians such as Régis Labeaume, Mayor of Quebec City.

“Today is an exciting day for our co-workers who are proud to welcome our first customers into our beautiful new store,” Lenoir said. “We are truly grateful to the local community for their enthusiasm and support for IKEA Quebec. We look forward to continuing to be an active community partner.”

The store’s opening created some 280 jobs – about half of which are full-time – to the local economy. This is in addition to the 500 indirect jobs created through store construction and service contracts.

IKEA Quebec was constructed with sustainability in mind and will be LEED certified, with a focus on energy efficiency and waste avoidance. It features a solar wall, electric vehicle charging stations and LED light sources throughout the property. 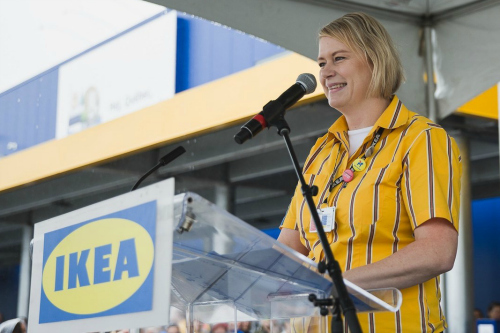 It also replaces the ‘pick-up and order point’ which opened in December 2015 and closed two weeks ago in anticipation of the opening of the new full-size store. Lenoir did note the 40,000 square foot order point was sales leader in the retailer’s global network.

What’s not well known is this a return to Quebec City for the Burlington, Ontario-headquartered subsidiary of the global home furnishings giant. A franchise store serving the city closed in the mid-1990s.

In 2015, IKEA Canada launched an aggressive expansion plan that would see it double its store count to 24 and its annual sales to about $3.5 billion over the decade ending in 2015. Store number 13 was opened last fall in Halifax with number 15 due to come online in the fall of 2019.

However, since that announcement last October – that it would open a 270,000 square foot store in London, Ontario – recent reports have suggested while IKEA is still purchasing the land it would sit on, plans for the store itself have been put on hold although no explanation why has been given. For Halifax and Quebec City, there was a two-year cycle from announcement to opening. To meet its self-imposed goal, the retailer needs to build eight stores in the next six years.