BURLINGTON, Ontario – In honour of Pride Week, IKEA Canada collaborated with members of the 2SLGBTQ+ community to start conversations around The Rally Table, creating a platform for meaningful advocacy and representation. The table is a one-of-a-kind piece of furniture the retailer made from Pride rally signs that highlight messages of belonging, hope and joy.

The Rally Table will be featured in a video ad campaign for IKEA, launching this Pride month, where notable Canadian 2SLGBTQ+ community members will discuss their experiences and the importance of advocacy in the community. 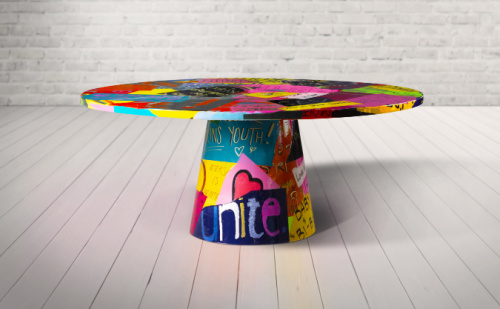 “The Rally Table was designed with the intention of inspiring Canadians to create safe spaces for 2SLGBTQ+ to discuss their personal experiences, identity, and needs,” IKEA Canada marketing campaign leader Jordan Sequeira said in a statement. “At IKEA, we’re committed to creating a welcoming, safe and accepting environment for all of our customers and co-workers, including 2SLGBTQ+ people across the country. We want to be activists for social change, by inspiring and enabling customers and communities to become changemakers for equality.”

Starting June 23, the new IKEA Toronto Downtown location – which is located on that city’s Pride parade route – will host the table in their front entrance.

IKEA Canada is launching a campaign built around the Rally Table, where six individuals from the 2SLGBTQ+ community who are passionate about activism to discuss their stories and what the platform means to them.

During every step of the campaign – from creative concepting, to the fabrication of the table, to the film crew – this project was used as an opportunity to employ, uplift and collaborate with as many 2SLGBTQ+ community members as possible.

The table was handcrafted by J&S Reclaimed Wood, a fabrication company whose founders are members of the 2SLGBTQ+ community.

IKEA Canada also hopes the table inspires Canadians to feel more confident in having open dialogue and continue to create spaces where conversations can happen safely.