BURLINGTON, Ontario – In honour of upcoming Pride celebrations across the country, IKEA Canada collaborated with designers active in the 2SLGBTQ+ community to create Love Seats, a series of one-of-a-kind slipcovers inspired by the colours of different Pride flags, and the lived experiences of the spectrum of gender and sexual identities they represent.

In a statement, the retailer noted throughout the COVID-19 pandemic, storytelling and personal connection have played an important role in bringing Canadians together. People are craving intimate, meaningful and authentic stories that spark joy, make them think, or teach them something new. The Love Seats serve as a platform upon which members and allies of the 2SLGBTQ+ community can feel safe to share their love stories with the world – whether those stories are about self-love, romantic love, family love, chosen love or community love. 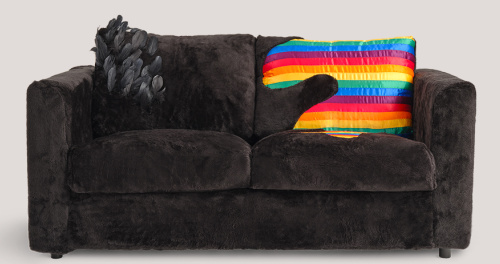 All ten Love Seat slipcovers were handcrafted by one of four designers active in the 2SLGBTQ+ community. Three existing IKEA sofas have been selected to support the slipcovers, including Finnala, Klippan and Härlanda. The approach to create each slipcover varied by artist, with some creating net-new custum, cut-and-sew covers and others using an existing slipcover as a canvas and transforming it with new media and materials.

Lisa Huie, public relations leader for IKEA Canada told Home Goods Online, the slipcovers won’t be mass produced for retail and at the end of this year’s Pride season, the slipcovers will be donated to some of the various LGBTQ organizations it supports.

The Toronto-based Bianca Daniela Nachtman designed four of the slipcovers, including:

The Love Seats designed by Charlotte Carbone include:

The collection is rounded out by Ali Haider who created:

With the Love Seats, IKEA Canada and its collaborators hope to honour the richness and diversity of the 2SLGBTQ+ community while igniting a national conversation about identity and representation.

“Each Love Seat was designed in collaboration with a community member and inspired by the colours and personal meaning of the corresponding flag. Each designer had the freedom to create a one-of-a-kind piece of art,” IKEA Canada director of marketing communications Claudia Mayne said. “This partnership is our way of helping artists in different communities express themselves on a large platform in a way that's been tricky during COVID-19.”

“As a designer, I’ve always created items that allow for people to express themselves truly and I was so happy to bring that into these Love Seats,” says Bianca Nachtman. “Molding these couches to reflect someone's intimate experience was one of the most rewarding aspects of this project.”

Jules Reeves, a trans woman featured in the campaign with her partner Michael, says, “It means so much for us to have the focus of the campaign be our love for ourselves and one another, because that love is what sparks a feeling of home and belonging within the queer community.”

Scott Wabano appears in the campaign with his cousin, who supported him in his journey to identifying as 2Spirit. “To be in this campaign and showcase my true authentic self as a 2Spirit Eeyou means more than anything I could ever dream. I never saw people like myself in the media growing up.”

“At IKEA, celebrating IDAHOT and Pride means advocating for a more fair and equal world free from homophobia, transphobia and biphobia,” said IKEA Canada equity, diversity and inclusion leader John Williams. “We want people of all sexual orientations and gender identities to feel at home at IKEA and everywhere. This year’s Love Seats collaboration aligns with our commitment to create community for, and uplift the voices of, our 2SLGBTQ+ co-workers and customers, so that they feel welcomed, respected and appreciated for who they are.”

IKEA Canada’s support of Pride has expanded in recent years with Pride flags raised at all 14 of its stores since 2017. It has also sponsored Pride Toronto to help furnish safe spaces for the community and proceeds from the sale of rainbow coloured Storstomma bags have been donated to organizations benefiting the 2SLGBTQ+ community since 2018. This year, proceeds from the sale will benefit local organizations including: Ten Oaks Project, Friends of Ruby, Pride Centre of Edmonton, Skipping Stone, Rainbow Resource Centre, QMUNITY, The Youth Project, and Fondation Émergence.

The Love Seats will be on display at select IKEA locations throughout the summer beginning June 24, 2021. They are also featured on the company’s web site at www.IKEA.ca/LoveSeats.