Housing starts up in July

OTTAWA – Housing starts were up in July by all three measures used by the Canada Mortgage & Housing Corporation (CMHC), in defiance of the expectations expressed by most leading economic observers.

The federal housing agency noted its trend in housing starts was 204,376 units in July 2020, up 2.3% from 199,778 units in June 2020. The trend measure is a six-month moving average of the monthly seasonally adjusted annual rates (SAAR) of housing starts.

“The national trend in housing starts increased for a second month in July,” CMHC chief economist Bob Dugan said in a statement. “Higher multi-family starts in major urban areas, including Toronto, Vancouver and oil-producing centres in the Prairies drove the national increase. Following declines in previous months from COVID-19 measures, higher activity in June and July leaves the trend in housing starts in line with the long-run average level of housing starts. We expect national starts to trend lower in the near term as a result of the negative impact of COVID-19 on economic and housing indicators.”

CMHC uses the trend measure to complement the monthly SAAR of housing starts as they can often be somewhat misleading because of the considerable swings in the monthly estimates driven by the multi-unit segment of the market which can vary significantly from one month to the next. 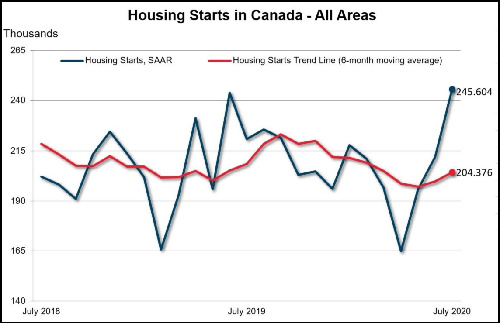 Rural starts were estimated at a seasonally adjusted annual rate of 13,609 units.

Actual starts in urban areas – which CMHC defines as towns and cities with populations of 10,000 and greater – also posted year-over-year increases.

Starts of single-family homes were pegged at a preliminary 4,849 units in July, up 5% from the 4,608 units started in July 2019. Regionally, they climbed throughout the eastern part of the country but declines in the Prairies and British Columbia.

For the year-to-date, single-family starts were totalled at 25,199 units, a 2% gain over the 24,732 units for the first seven months of last year. Once again, starts were up in Atlantic Canada, Quebec and Ontario while they fell throughout the west.

Meanwhile, multi-unit starts – including apartments, townhouses and other linked dwellings for both the rental and ownership markets – were pegged at a preliminary 15,262 units for July, up 13% over the 13,415 units in July 2019. They were up in every region except B.C., where they fell 21%.

Once again, starts fell in Quebec, the Prairies and B.C. and climbed in Atlantic Canada and Ontario.

“Indeed, aside from the complete pause in Quebec in April due to restrictions on non-essential economic activity, homebuilding has shown only a muted response to COVID-19, swiftly returning to pre-pandemic levels,” he continued, adding, “This stands in contrast with more severe declines and more drawn-out recoveries seen in other industries.”

He pointed out the strong demand for housings continues to be driven, at least in part, by the impact of past increases in population growth and demand more broadly, as well as historically low borrowing rates.

“These forces should continue to support housing activity in the near term,” Abdelrahman said. “However, as these forces wane, a slowdown in population growth (driven by lower immigration) will be a key downside risk to housing activity. Additionally, the strong level of activity seen in the Prairies (where Alberta and Saskatchewan suffer from an overhang of units since the 2014 oil price shock) and Atlantic Canada (where strong immigration has been a key driver supporting housing activity) is unlikely to be sustained.”