Housing starts trend lower in May

OTTAWA – Actual housing starts were up slightly in May 2022 over the same month last year, according to the latest figures from Canada Mortgage & Housing Corporation (CMHC), thanks mainly to upticks in the multi-unit segment of the market across the Prairies and in Atlantic Canada. However, for the first five months of the year, they fell 9%.

The federal housing regulator noted starts were also down according to its trend measure – a six-month moving average of the monthly seasonally adjusted annual rate (SAAR) of housing starts. But this measure, starts totalled 254,727 units in May, down from 257,833 units in April 2022.

CMHC uses the trend measure as a complement to the monthly SAAR of housing starts to account for considerable swings in monthly estimates and obtain a clearer picture of upcoming new housing supply. In some situations, analyzing only SAAR data can be misleading, as the multi-unit segment largely drives the market and can vary significantly from one month to the next. 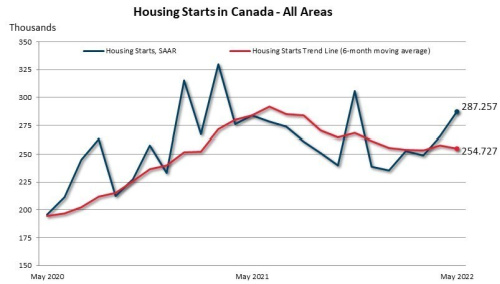 “On a trend and monthly SAAR basis, the level of housing starts activity in Canada is historically high, staying well above 200,000 units since 2020 and despite the lower trend, the monthly SAAR was higher from April to May,” CMHC chief economist Bob Dugan said in a statement. “The increase in monthly SAAR housing starts in Canada’s urban areas was driven by higher multi-unit starts in May. Among Vancouver, Toronto and Montreal, Vancouver was the only market to post a decrease in total SAAR starts, which was driven by lower multi-unit and single-detached starts.”

Rural starts were estimated at a seasonally adjusted annual rate of 23,095 units.

CMHC pegged starts of single-family homes in Canada’s urban centres – areas with a population greater than 10,000 – at an actual and preliminary 5,636 units in May 2022, a 7% decrease from the 6,058 units started in the same month last year. This was driven by big drops in activity in both Quebec and Ontario, offset by upticks in Atlantic Canada, across the Prairies and in British Columbia.

For the first five months of the year, starts in this category – usually considered the most important – were down 12% to 21,752 units, from last year’s 24,821 units. The declines were recorded in this country’s three largest markets – Quebec, Ontario and B.C. There were modest gains in both the Prairies and Atlantic Canada.

Actual starts in the multi-unit segment of the market, which includes apartments, townhouses and other linked housing for both the rental and ownership markets, were up 7% at a preliminary 17,214 units, compared to 16,040 unit in May 2021. The upticks in Atlantic Canada, Quebec and the Prairies were offset by declines in Ontario and B.C.

For the year-to-date, multi-unit starts totalled 66,856 units, down from 72,557 unit for the comparable period last year – a drop of 8%. Upticks in Atlantic Canada and the Prairies were more than offset by declines across the rest of the country.

For the first five months of 2022, total starts were tagged at 88,608 units, down 9% from the 97,388 units for the comparable period last year. Once again, upticks in Atlantic Canada and across the Prairies weren’t enough to offset declines in Quebec, Ontario and B.C.

In her research note, Rishi Sondhi of TD Economics pointed out despite rapidly cooling sales and prices, builders continued to break ground on new homes “because housing starts are in large part a function of past sales activity.”

This, alongside low levels of new home inventories, underpins her expectation housing starts will remain elevated through the rest of this year. She also noted the issuing of building permits is also currently elevated.

“However, we look for starts to trend notably lower in 2023, as rising rates and cooling activity weigh on home building,” Sondhi forecast.