OTTAWA – Apartment and other multi-family housing construction in larger urban centres drove housing starts higher in June, according to the Canada Mortgage & Housing Corporation (CHMC), at least according two of the three measures it employs to analyse the state of this country’s housing market.

CMHC said the trend in housing starts for the month of June 2019 was 205,838 units – up from 200,530 units in May 2019. The trend is a six-month moving average of the monthly seasonally adjusted annual rate (SAAR) of housing starts. 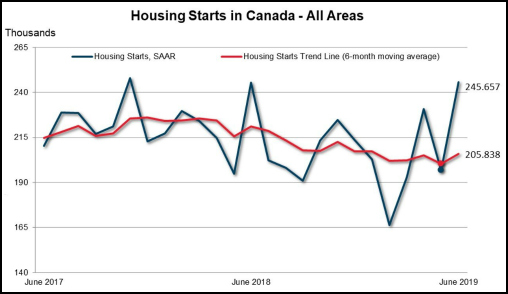 CMHC uses the trend measure as a complement to the monthly SAAR of housing starts to account for the considerable swing often found in the monthly estimates. These are largely driven by the multi-unit segment, which can vary significantly from one month to the next.

Rural starts were estimated at a seasonally adjusted annual rate of 11,419 units.

However, CMHC’s preliminary estimates for actual housing starts in urban areas – defined as towns and cities with a population of 10,000 or more – tell a slightly different story.

For the first half of 2019, single family home starts are down 23% to 20,124 units – compared to 26,229 units for the comparable period last year. Once again, starts were down by double digits in every region of the country except Quebec, where the decline was only 6%. Ontario’s decline was the steeped at 30%.

Construction in the multi-unit segment – this includes apartments, townhouses and other linked dwellings either for the rental or the condominium market – was put 8% at a preliminary 16,316 units, up 15,093 units in June 2018. Leading the gain was British Columbia, where building in this category climbed 111% last month.

For the year-to-date, multi-unit starts were up 4% at 71,573 units. Once again, B.C. saw 30% upswing, while Atlantic Canada and Quebec also saw improvements while declines were felt in Ontario and the Prairies.

This meant total housing starts were up a preliminary 3% nationally in June at 21,548 units, with every region of the country recording gains, except Ontario where total starts fell 34%.

However, despite this total housing starts for the first half of 2019 are down 4% at 91,697 units – from 95,033 units for same period last year. Starts were up in B.C., Atlantic Canada and Quebec but fell in Ontario and the Prairies.

In his research note, which focuses on the SAAR of housing starts, Rishi Sondhi of TD Economics said, “Any way you slice it, June was an impressive month for homebuilding.”

He also pointed out CMHC’s report on June’s activity completes what he describes as “a robust second quarter that saw starts advance 20% quarter-on-quarter.”

“June’s strong report adds to the list of indicators confirming that economic growth in the second quarter was likely much stronger than the Bank of Canada had projected,” Sondhi said, adding, “New housing construction in Canada continues to hold up well, in contrast to the resale market, which has cratered in recent years in the face of past interest rate increases and government policies.

“Homebuilding is being supported by robust population growth, strong labour markets, and past gains in pre-construction sales,” he continued while noting the current trend measure is off its near-term peak observed in late 2017. This means starts should move closer to the 200,000-unit (annualised) level, which is supported by the country’s current demographic profile.