OTTAWA – While the trend in housing starts climbed to 208,970 units in July 2019 from 205,765 units in June, they fell on both an actual and seasonally adjusted basis according to the latest figures from Canada Mortgage & Housing Corporation (CMHC). The discrepancy was attributed to upswings in apartment and row housing in at least two regions of the country.

The trend measure is a six-month moving average of the monthly seasonally adjusted annual rates (SAAR) of housing starts.

“The national trend in housing starts increased in July, despite a decrease in the level of SAAR activity from June,” CMHC chief economist Bob Dugan said in a statement. “High levels of activity in apartment and row starts in urban centres in recent months continued to be reflected in the high level of the total starts trend in July.” 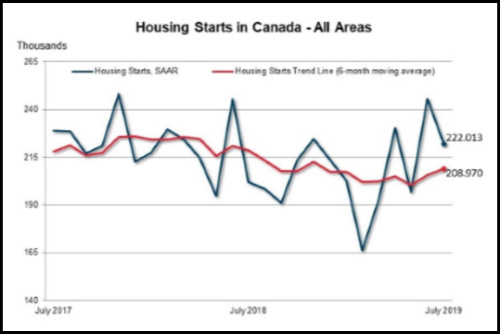 CMHC uses the trend measure as a complement to the monthly SAAR to account for the sometime considerable swings in the estimates, which are largely driven by the multi-unit segment of the market and can vary significantly from one month to the next.

Rural starts were estimated at a seasonally adjusted annual rate of 12,891 units.

Single-family starts were down in every region of the country, ranging from 6% in Quebec to 27% in Ontario.\

Meanwhile, starts in the multi-unit segment – including apartments, townhouses and other linked housing for both the rental and condominium markets – were up 17% at a preliminary 13,381 units for July, up from 11,432 units. For the year-to-date, the count is up 6% to 84,954 units.

Total starts for the month were up 7% to 18,005 units but down 2% for the year-to-date at 109,702 units. Gains were recorded in B.C., Atlantic Canada and Quebec while they fell in Ontario and across the Prairies.

In his research note, Sri Thanabalasingam of TD Economics observed that for most provinces, the level of housing starts stood above their 2019 year-to-date average. “These data suggest that while residential investment is slowing, it will remain healthy in Q3,” he wrote.

“On the whole, homebuilding appears to be more robust than previously thought,” he continued. “While residential investment gains are expected to weaken from an extraordinary second quarter, solid fundamentals – increasing population, low interest rates and rising wages – suggest residential investment could see sustained healthy gains through the second half of this year.”