OTTAWA – Based on its trend measure, the Canada Mortgage & Housing Corporation (CMHC) has reported housing starts held steady in the first month of 2019 coming in at 208,131 units on an annualised basis. However, starts fell on both a seasonally adjusted and actual basis.

January’s trend was just slightly higher than the 207,171 units started in December 2018.

The trend measure is a six-month moving average of the monthly seasonally adjusted annual rate (SAAR) of housing starts. It is used to complement the monthly SAAR of housing starts, which often swings considerably thanks to the multi-unit segment which are can vary significantly from month-to-month. 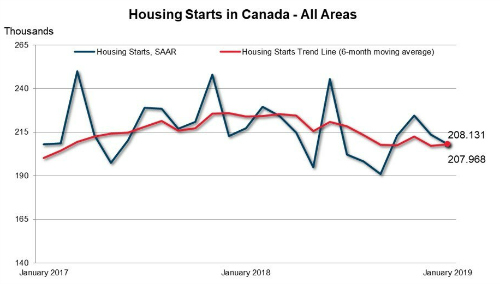 “After recent declines, the national trend in housing starts held steady in January and remained above historical average,” CMHC chief economist Bob Dugan said in a statement. “While single-detached starts continued to trend lower in January, this was offset by an uptick in the trend for multi-unit dwellings in urban centres.”

Rural starts were estimated at a seasonally adjusted annual rate of 17,056 units.

CMHC defines urban as towns and cities with populations greater than 10,000.

Actual starts of single-family homes were set at a preliminary 2,470 units in January – down 30% from the 3,534 units started in January 2018. Starts fell in every region of the country, including Ontario and British Columbia where they fell 34%.

Multi-unit segment starts – whether for the condominium or rental market – gains 5% in January coming in at a preliminary 10,099 units, compared to 9,588 units for the first month last year. The uptick was seen in every region of the country except Ontario, where they fell 3%.

In his research note, Rishi Sondhi of TD Economics said homebuilding seems set to continue bulwarking the overall Canadian economy despite fears to the contrary.

“Despite dipping in January, homebuilding continues to proceed at a strong rate, helping offset the drag from weak resale activity and providing a notable bright spot for the overall economy,” he wrote, adding a recent report on building permits indicates starts will remain healthy in the short term.

“The multi-family sector is buoying homebuilding as condo starts respond to past gains in pre-construction sales. Rental construction is also strong amid low vacancy rates in key markets, boosted by government programs aimed at adding more affordable stock to the market,” Sondhi said.

“We look for housing starts to remain elevated this year. However, starts should ease in 2020, as more recent softness in pre-construction sales and an inventory overhang in the Prairies causes homebuilding to pull back,” he continued.

However, he cautioned the absorption of these new units needs to be monitored over the coming few years. To date, these new units are being absorbed, but that could change in a softer demand environment.