OTTAWA – Housing starts reached a 10-year high in November, according to Canada Mortgage & Housing Corporation (CMHC), which reported its trend measure hit 226,270 units for the month, compared to 216,642 units in October.

The trend measure is the six-month moving average of the monthly seasonally adjusted annual rates (SAAR) of housing starts. CMHC uses it to complement the monthly SAAR to account for the swings in the monthly estimates, which are largely driven by the market’s multi-unit segment which can vary significantly from one month to the next. 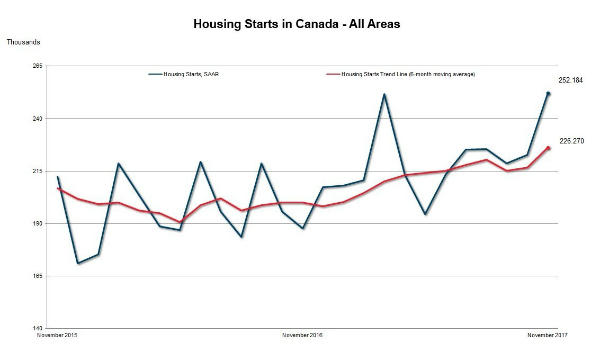 “The trend in housing starts reached its highest level in almost 10 years this November, reflecting a second consecutive increase in multiple starts,” CMHC chief economist Bob Dugan said in a statement. “This largely reflects construction of multiple units in Toronto, where evidence of overbuilding is low due to the decreasing inventory of completed and unabsorbed multiple units and strong demand.”

CMHC reported starts of single family homes in urban areas – which it defines as towns or cities with populations greater than 10,000 – were set at a preliminary 5,477 units in November, down 4% from the 5,689 units recorded for November 2016.

Meanwhile, actual multi-unit starts – including apartments, townhouses and other linked housing for both the condominium and rental markets – were set at 15,249 units for November, leaping 63% from the 9,367 units for the same month last year.

CMHC’s data showed the biggest gains were in Ontario, where total starts climbed some 66% on a year-over-year basis for the month of November.  Every other province posted upticks except for Nova Scotia where total starts fell 8%.

For the year-to-date the only province to record a drop in total starts was Newfoundland & Labrador. All others recorded double digit gains, except Ontario which was up 9% and British Columbia where starts climbed 2%.

“Homebuilding activity was extremely solid in November, rising to its highest level since April 2012,” Rishi Sondhi of TD Economics said in his research note. “Housing construction has remained resilient this year despite the ‘one-two punch’ of regulatory measures aimed at cooling housing demand and rising mortgage rates. Ultimately, a healthy economic backdrop and firm population growth have provided support to homebuilding activity nationally.”

Despite November’s glowing report, Sondhi said TD still expects homebuilding to ease to under 200,000 units in 2018 – thanks mainly to high mortgage rates and updated eligibility requirements, which will have a disproportional impact on the Toronto and Vancouver markets where affordability is becoming a critical issue.