OTTAWA – Actual housing starts fell in August according to data from the Canada Mortgage & Housing Corporation (CMHC). They also fell on a seasonally adjusted annual rate (SAAR) basis but climbed slightly when viewed with the six-month trend measure.

Rural starts were estimated at a seasonally adjusted annual rate of 20,672 units.

“The six-month trend in housing starts was higher in August compared to July, despite a lower monthly SAAR. Housing starts activity remains elevated in Canada historically and have been well above 200,000 units since 2020,” CMHC chief economist Bob Dugan said in a statement. 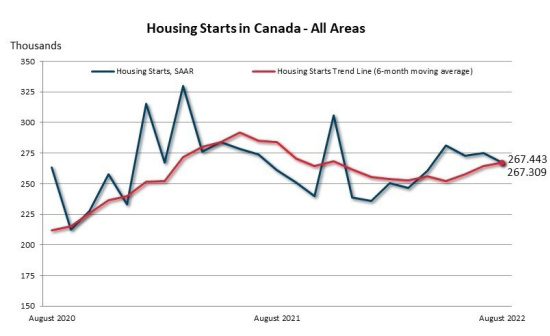 The trend in housing starts was 267,309 units in August, up slightly (1.1%) from 264,467 units in July. This trend measure is a six-month moving average of the monthly seasonally adjusted annual rates (SAAR) of housing starts.

The trend measure is used as a complement to the monthly SAAR of housing starts to account for the often-considerable swings in the monthly estimates as the multi-unit segment – which largely drives the overall market – can vary significantly from one month to the next.

Declines in Ontario and British Columbia were offset by gains in Atlantic Canada, Quebec and across the Prairies.

For the first eight months of the year, single-family home starts tallied 39,160 – a 9.0% decline from the 42,925 units started for the comparable period of 2021. The declines were seen in B.C., Ontario and Quebec with only a slight offset from the Prairies and Atlantic Canada.

Multi-unit segment starts – this could be apartments, townhouses or any other form of linked housing – tallied an actual preliminary total of 15,189 units for the month of August. This was up 9.0% over the 13,896 units for the same month last year but down 7.7% from July’s 16,457 units.

Gains were recorded in every region of the country ranging from 2.0% in Ontario to 139.0% in Atlantic Canada.

Once again, the declines were seen in this country’s three largest markets – B.C., Ontario and Quebec – although Atlantic Canada and the Prairies both saw double digit increases.

“Builders continue to break ground on new homes at a healthy clip, despite sharp declines in sales and prices through much of this year,” Rishi Sondhi of TD Economics observed in her research note. “This is because builders are responding to past increases in sales activity.”

She also noted a recent report on building permit activity suggested starts will continue to enjoy ‘near-term’ strength at an annualized rate of 266,000 units.

“Looking past the near-term, we think starts will trend lower towards the end of this year and in 2023,” Sondhi said. “This reflects rising interest rates (which have boosted financing costs) and declining demand which should begin to seep into supply. That said falling, but still elevated home prices coupled with low levels of unsold new inventories should keep the pace of starts above 200,000 units (a year), representing a fairly solid pace.”