OTTAWA – Housing starts across the country climbed in August by all three of the measures used by the Canada Mortgage & Housing Corporation (CMHC), although the rosy national picture continued to mask significant regional differences, particularly across the Prairies. 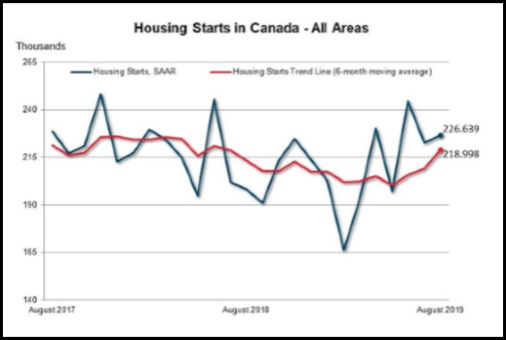 “The national trend in housing starts increased in August,” CMHC chief economist Bob Dugan said in a statement. “Higher trending single-detached starts in urban centres in July and August following roughly a year of declines combined with higher-trending multi-family units in August to push the total starts trend to its highest level since June 2018.”

CMHC uses the trend measure to complement the monthly SAAR of housing starts, which can be misleading as they are largely driven by the multi-unit segment of the market which can vary significantly from one month to the next.

Rural starts were estimated at a seasonally adjusted annual rate of 12,976 units.

In a reversal from most prior months so far this year, actual starts of single-family homes climbed 4% to a preliminary 4,920 units in August, compared to 4,743 units in August 2018. Regionally, they climbed in Atlantic Canada and Ontario and were flat in Quebec while falling across the Prairies and in British Columbia.

For the year-to-date, single family starts totalled 29,668 units – an 18% decline from the 36,314 units for the comparable period last year. They fell in every region of the country, from 5% in Quebec to 21% in Ontario.

Meanwhile, starts in the multi-unit segment – whether apartments, townhouses or other linked dwelling for either the rental or condominium markets – continued to climb, advancing 16% to a preliminary 12,691 units in August, compared top 10,973 units last year.

Total housing starts were up 12% in August at 17,611 units. However, for the first eight months of the year they were essentially flat at 127,313 units. As with the month of August, for the year starts were up in Atlantic Canada, Quebec and B.C. and down in Ontario and the Prairies.

“Canadian homebuilding simply won't quit,” Rishi Sondhi of TD Economics remarked in her research note, adding that so far in the third quarter, starts were slightly higher than those in the second quarter.

“Combined with a probable rise in home sales, this suggests a healthy quarter is in store for residential investment in Q3,” she continued, adding, “Moving forward, homebuilding is likely to remain strong through the remainder of this year, as solid demand fundamentals – namely low mortgage rates, healthy population growth and solid labour markets – underpin construction.”