Housing starts fell in May

OTTAWA – Housing starts fell across the country by all three measures used by the Canada Mortgage & Housing Corporation (CMHC) in May, although most analysts continue to believe the sector is fundamentally strong will continue to bulwark the Canadian economy in the coming months.

The federal housing agency reported that its trend measure for housing starts came in at 196,750 units in May 2020, down from 198,655 units in April. The trend measure is a six-month moving average of the monthly seasonally adjusted annual rates (SAAR) of housing starts.

“Outside of Quebec, the national trend in housing starts decreased in May,” CMHC chief economist Bob Dugan said in a statement. “Higher multi-family starts in Ontario and the Atlantic provinces were offset by declines in British Columbia and the Prairies. We expect national starts to continue to register declines in the near term, reflecting the impact of COVID-19 measures.” 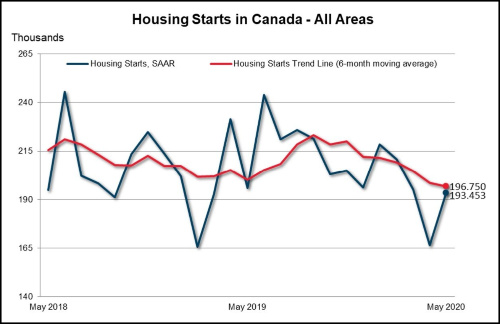 CMHC uses the trend measure as a complement to the SAAR of housing starts to account for the swings in the monthly estimates, which can be misleading as they are largely driven by the multi-unit segment of the market which can vary significantly from month to month.

However, actual starts in this country’s urban centres – which CMHC describes as area with populations of 10,000 or greater – paint a slightly different picture.

Starts of single-family homes were pegged at a preliminary 4,397 units for the May – essentially unchanged from the 4,401 units started in May 2019. Starts were up in Quebec and Ontario, but down in Atlantic Canada, the Prairies and British Columbia.

For the year-to-date, single-family starts numbered 15,987 units – a gain of 7% over the comparable period’s 14,888 units. While up in Atlantic Canada, Ontario and the Prairies, they fell in Quebec and B.C.

Meanwhile, starts in the multi-unit segment were tagged at a preliminary 11,704 units, a 3% decline over May 2019. For the first five months of 2020, starts in this segment fell 8% to 51,049 units. The drops were most keenly felt in Quebec and B.C. as they climbed 10% in Ontario and 13% in Atlantic Canada and were essentially flat across the Prairies.

Total housing starts were set at a preliminary 16,101 units for May while for the year-to-date they declined 4% to 67,036 units. Once again, the declines were found in Quebec and B.C. with gains registered in Atlantic Canada (17%), Ontario (13%) and the Prairies (3%).

“While easing up a touch, homebuilding has generally remained resilient in the face of the pandemic,” Rishi Sondhi of TD Economics, observed in her research note. “While this result may surprise some, we note that homebuilding is in part a function of past housing demand, which has been strong. In addition, most provinces didn't shutdown their construction sectors in response to the outbreak.”

Despite this, she questions how long the sector can maintain the pace, noting building permit issuance pulled back sharply in April, “which could flag near-term weakness ahead. Looking further out, the prospect of significantly slower population growth in coming quarters dims the medium-term prospects for homebuilding.”