OTTAWA – Total actual housing starts across the country fell slightly in 2022, driven by a substantial decline in the building of single-family homes, according to figures published recently by the Canada Mortgage & Housing Corporation (CMHC).

While starts were essentially flat in Ontario, declines in Quebec and British Columbia were only partially offset by gains in Atlantic Canada and across the Prairies. 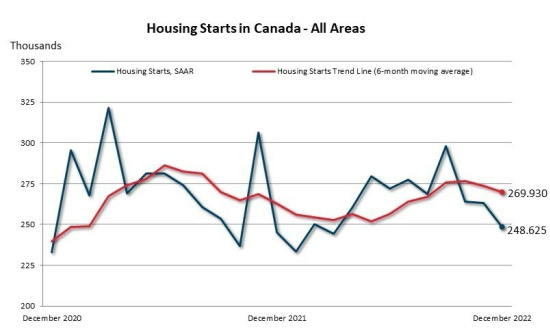 Starts of single-family homes in urban areas – defined as towns and cities with populations greater than 10,000 – totalled 57,558 units for 2022, down 9% from the 63,487 units starts in 2021 but higher than the 49,740 units for 2020. The decline was felt in every region of the country except the Prairies where they were basically flat year-over-year.

Starts in the multi-unit segment – which includes apartments, row houses and other forms of linked dwellings – totalled 183,036 units last year, a slight 1% gain over the 180,354 units started in 2021. There were 152,383 starts in this market segment in 2020. Gains were recorded everywhere across the country except Quebec where they fell 14%.

Rural starts were estimated at a seasonally adjusted annual rate of 20,917 units.

The trend in housing starts was 269,930 units in December, down 1% from 273,801 units in November. This trend measure is a six-month moving average of the monthly SAAR of housing starts.

“The 2022 year ended with a slight decline for both the monthly SAAR of housing starts and the trend at the national level in December; however, Toronto, Montreal, and Vancouver all posted increases in total SAAR housing starts, with Toronto posting a significant increase of 72% in December. The rate of new construction continued at an elevated pace in 2022 overall, ending the year with actual total urban starts at 240,590 units (-1%) in Canada, similar to levels observed in 2021 (244,141 units). While these additional units will provide much needed supply on the market, demand for housing in the country will continue to grow. We need to find innovative ways to deliver more housing supply and keep building at a higher pace in the coming years in order to improve affordability,” CMHC chief economist Bob Dugan said in a statement.

Like clockwork, housing starts continue to trend at healthy levels roughly 30% above their pre-pandemic run-rate,” Rishi Sondhi of TD Economics said in her research note. “Homebuilding is being buoyed by low inventory levels and past sales gains.

“However,” she continued, “it’s only a matter of time before weaker demand conditions that have persisted since early 2022 begin to materially impact homebuilding. We are forecasting a notable slowdown in housing starts, both this year and in 2024.”