OTTAWA – The housing market continued to cool in December, falling by all three of the yardsticks used by the Canada Mortgage & Housing Corporation (CMHC) to measure its performance. The trend fell 2.6% to 206,981 units, compared to 212,338 units in November 2018. They also fell on a seasonally adjusted and actual basis.

This trend measure is a six-month moving average of the monthly seasonally adjusted annual rates (SAAR) of housing starts and is used by CMHC to account for considerable swings in estimates which can be misleading, as they are largely driven by the multi-unit segment that often varies significantly from one month to the next.

“The national trend in housing starts decreased in December, the fifth decline in the last six months,” CMHC chief economist Bob Dugan said in a statement. “Reflecting these recent declines, total annual housing starts in 2018 were lower than in 2017 as lower single-detached starts more than offset a slight increase in multi-family starts this year. Nonetheless, total housing starts remain elevated when compared to historical averages.” 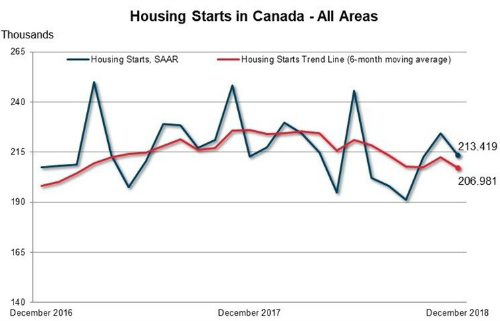 Rural starts were estimated at a seasonally adjusted annual rate of 18,825 units.

Actual starts of single-family homes on urban areas – which CMHC defines as a community with a population of 10,000 or more – fell 21% in December to a preliminary 4,039 units, compared to 5,084 units in December 2017. The decline was felt in every region of the country, most keenly across the Prairies which saw a drop of 29% and Ontario, where the decline was 21%.

Meanwhile, starts in the multi-unit segment were up 9% in December at 12,914 units, compared to 11,799 units for the same month in 2017. Advances were seen in every region of the country except the Prairies where they fell 14%.

For the full year, multi-unit segment starts were set at a preliminary 142,492 units, up 3% from the 138,884 units started the prior year. Gains were highest in Ontario at 11% while starts fell 5% in both the Prairies and British Columbia.

Total housing starts for the month of December 2018 were pegged at 16,963 units – statistically unchanged from December 2017. Gains of 12% in Ontario and 19% in Atlantic Canada were offset by declines of 22% across the Prairies and 2% in B.C.

For the year, starts were numbered at 196,717 units, off 3% from 202,374 units in 2017. Once again, gains in Ontario and Atlantic Canada were offset by declines in the Prairies and B.C. Starts in Quebec were essentially flat on a year-over-year basis.

Rishi Sondhi of TD Economics described December’s housing starts as healthy in his research note, writing, “Homebuilding is being buoyed by strong population growth, on-going job gains, and past growth in pre-construction sales.”

He also pointed out starts were up10% on the fourth quarter of 2018 when compared to the third quarter, which consisting production cuts in the oil sector, should be good news for the overall Canadian economy.

“We expect homebuilding to glide below the 200k mark in 2019 as higher mortgage rates, tighter lending conditions and strained affordability in key markets weighs on demand,” Sondhi said. “Overbuilt markets in the Prairies and moderating pre-construction sales activity are also factors which should cool the pace of new housing construction moving forward. On the supportive side, a rising population coupled with continued – albeit slower – economic growth should ensure that the moderation remains orderly.”