OTTAWA – Housing starts continued to decline in September by all three measures used by Canada Mortgage & Housing Corporation (CMHC). The trend fell 2.9% from 213,966 units in August to 207,768 units last month.

The trend measure is a six-month moving average of the monthly seasonally adjusted annual rates (SAAR) of housing starts. Its used as a complement to the monthly SAAR to account for frequent swings in the estimates, which are driven by the multi-unit segment that often varies significantly from one month to the next. Housing starts also fell on the seasonally adjusted and actual basis as well.

“The national trend in housing starts stood at a 19-month low in September, following declines in four of the last five months,” CMHC chief economist Bob Dugan said in a statement. “The slowdown in the pace of new residential construction activity in recent months is a result of both lower single-detached and multi-starts activity and brings new residential construction closer to its long run average from the elevated levels registered in 2017.” 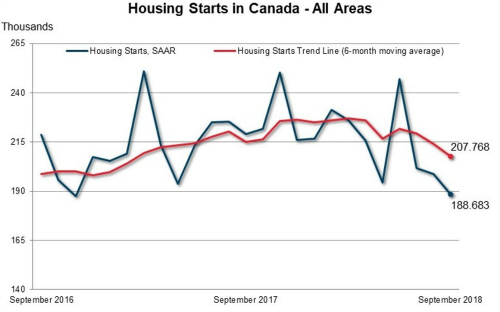 CMHC classifies urban starts as those in town and cities with populations of 10,000 or higher.

Actual starts of single-family homes fell to 5,025 units in September 2018 from 6,351 units in September 2017 – a 21% drop. The decline was felt in every region of the country except Quebec, where they were essentially flat on a year-over-year basis. Starts in this category were down 24% in Ontario and 20% in British Columbia.

Meanwhile, multi-unit starts – which covers apartments, townhouses and other forms of linked housing for both the rental and condominium markets – fell 6% in September to 11,710 units. They were down 37% in B.C. and 19% in Quebec but up 21% on Ontario, further evidence of the regional volatility in Canada’s national housing market.

Multi-unit starts, however, stayed positive for the year-to-date, gaining 4% to reach a preliminary count of 102,868 units. They are up in every region of the country, except the Prairies where they slipped a slight 1%. Leading was the Atlantic region, where starts for the first three quarters of 2018 were up 8%, followed by Ontario which was up 6%.

For the year-to-date, CMHC estimated total actual starts at 144,220 units which is down 2% from the comparable period. Starts were off in every region of the country, expect B.C. where they were essentially flat.

In his research note, Rishi Sondhi of TD Economics expressed some surprise at CMHC’s report as forecasts were previously calling for an uptick in housing starts in September.

“The pace of homebuilding is clearly moderating, with starts lower in six of the past seven months,” he said. “Rising interest rates, regulatory changes and affordability pressures are weighing on demand and feeding through to homebuilding. Still, healthy permit issuance argues against starts heading much lower, at least in the near-term.”