OTTAWA – Housing continued to bulwark the Canadian economy as 2020 ended as starts climbed on two of the three measures used by the Canada Mortgage & Housing Corporation (CMHC). Indeed, on an actual basis they climbed over the 200,000 for the first time since 2017.

The federal housing agency reported its trend measure put housing starts at 239,052 units on an annualised basis in December 2020, up from 236.332 units in November.

The trend measure is a six-month moving average of the monthly seasonally adjusted annual rates (SAAR) of housing starts. It’s used to complement the month SAAR, which can be misleading at times because of the multi-unit segment of the market that often varies significantly from month to month.

“The national trend in housing starts increased in December 2020,” CMHC chief economist Bob Dugan said in a statement. “Following pandemic-induced declines in early 2020, the trend in total housing starts has registered steady gains since May 2020. Despite the ongoing pandemic, these gains leave the year-end 2020 SAAR of total starts above the 2019 annual total.” 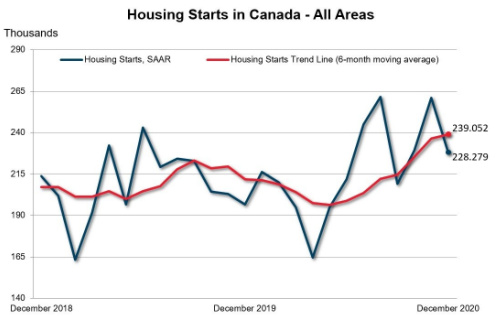 Due to COVID-19, CMHC’s monthly survey for December 2020 didn’t include Kelowna, British Columbia. The agency noted this didn’t impact the overall trend direction in December and will be included in this month’s study.

Rural starts were estimated at a seasonally adjusted annual rate of 22,373 units.

Actual starts in urban areas – which CMHC defines as towns and cities with populations of more than 10,000 – advanced in December 2020.

According to the data, starts of single-family homes were preliminarily set an actual 4,335 units for the month, up 12% from the 3,874 units in December 2019. They were up in every region of the country.

For the entire year, single-family starts totalled 49,704 units – up 6% from the 46,941 units recorded for 2019. Starts were up in Atlantic Canada, Quebec and Ontario but down across the Prairies and in British Columbia.

Meanwhile, starts in the multi-unit segment – which includes apartments, townhouses and other linked dwellings for both the rental and ownership markets – were advanced 13% to a preliminary 13,449 units in December, compared to 11,898 units for the same month the prior year. Once again, starts were up everywhere but the Prairies and B.C.

For the entire year, CMHC set housing starts at an actual 202,128 units – up 3% over the prior year’s 196,729 units. In what has become an all-to-familiar pattern, starts were down across the Prairies and in B.C. but up in Ontario, Quebec and Atlantic Canada.

In her research note, Rishi Sondhi of TD Economics said she wasn’t surprised December’s numbers were lower than those recorded in November 2020 saying the drop was to be expected considering everything that’s happening in the economy. “Still, homebuilding ended last year on solid footing, buoyed by gains in past home sales and population growth, a declining inventory of unsold new homes, as well as low interest rates.”

December’s tally pushed starts up for the entire fourth quarter, reinforcing TD’s view that residential investment would make a positive contribution to overall economic growth for the final three months of the year.

“Focus now shifts to January, where in the battle against the pandemic, Ontario’s government recently shuttered ‘non-essential’ construction activities,” Sondhi observed. “Homebuilding should be relatively unscathed by these restrictions, just as in the first wave, when similar measures were implemented. Notably, condo projects are allowed to continue as can other residential projects for which a permit has been granted. On that note, permit activity in Ontario (and Canada overall) has been solid in recent months.”