OTTAWA – The decision by the government of Premier François Legault to shut down all construction work in Québec during the month of April as part of its fight against the COVID-19 pandemic was the primary cause of a significant slowdown in housing starts across the country, figures published last week by the Canada Mortgage & Housing Corporation (CMHC) reveal. Construction resumed towards the end of the month.

“Outside of Québec, the national trend in housing starts increased in April, despite the impact of COVID-19 containment measures. This reflects strong growth in multi-family starts in Ontario, Saskatchewan and Manitoba,” CMHC chief economist Bob Dugan said in a statement, although he was quick to add, “We expect these provinces to register declines in the near term.” 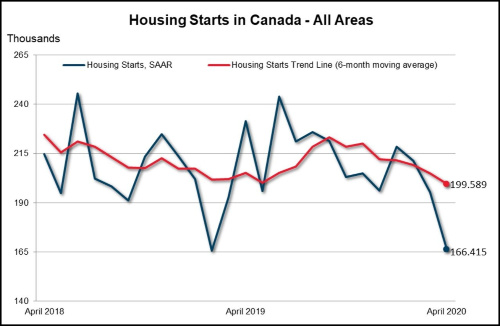 The federal housing agency uses the trend measure as a complement to the monthly SAAR of housing starts to account for the swings often seen in the estimates, caused largely by the market’s more volatile multi-unit segment which can vary significantly from one month to the next.

With no activity in Québec, actual housing starts took a significant hit in April, although Ontario continued showed modest growth on a year-over-year basis.

CMHC reported starts of single-family homes in urban areas – which it defines as towns and cities with populations greater than 10,000 – totalled a preliminary 2,855 units in April, a 20% decline from the 3,564 units started in April 2019. For the month, declines were felt across the country except in Atlantic Canada and Ontario.

For the year-to-date, single-family starts were set at 11,590 units – an uptick over 11% over the first four months of last year. Both Québec and British Columbia recorded double-digit declines with gains seen in the other three regions.

Meanwhile, starts in the multi-unit segment – which includes apartments, townhouses and similar dwellings for both the rental and ownership market – were set at a preliminary 9,920 units, a 32% drop from the 14,602 units in April 2019. In addition to Québec, declines were recorded in both Atlantic Canada and B.C.

For the year-to-date, starts in this segment tallied 39,345 units – a 9% fall from the 43,251 units started in the comparable period of last year. Atlantic Canada, Ontario and the Prairie region showed modest increases while sharp declines took hold in Québec and B.C.

In her research note, Rishi Sondhi of TD Economics noted “this was a surprisingly strong report” and stood in contrast to other emerging economic news such as a historically bad jobs report and the massive declines in home sales that were reported by many local real estate boards. She also pointed out starts were lower in February 2019 – because of severe winter weather.

“The relative strength seen in homebuilding is partly because construction was declared an essential service in most provinces,” she said, opining that because of overall conditions, if Québec has been included in the survey, the tally would have made the month-on-month comparison weaker.

“Starts are a generally a function of past housing demand, which has been robust,” Sondhi said, adding the March report on housing permits was also buoyant. “This suggests that some of the momentum in starts could carry forward in coming months.”