OTTAWA – Actual housing starts climbed dramatically in the month of September on a year-over-year basis, according to figures released recently by the Canada Mortgage & Housing Corporation (CMHC). They also climbed on a seasonally adjusted basis as well as by the agency’s trend measure, which is the six-month moving average of the seasonally adjusted annual rate (SAAR) of housing starts. But, it’s not seen a reversal of current trends in this country’s housing market.

Rural starts were estimated at a seasonally adjusted annual rate of 23,447 units. 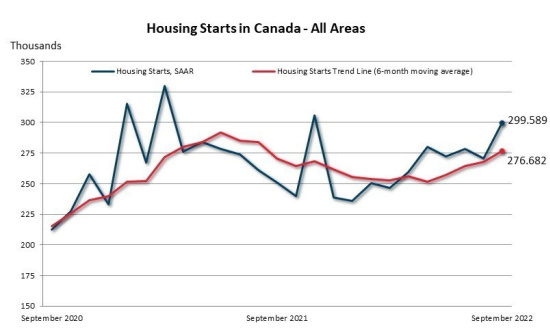 “Both the six-month trend and monthly SAAR in housing starts were higher in September compared to August. September’s increase in monthly SAAR housing starts in Canada’s urban areas was driven by higher multi-unit starts. Montreal, Toronto and Vancouver recorded large increases in SAAR multi-unit starts, resulting in the overall increase for Canada. While single-detached units were up 85% in Vancouver, single-detached starts were flat in Toronto and Montreal. Housing starts activity remains elevated in Canada in 2022,” CMHC chief economist Bob Dugan said in a statement.

The trend in housing starts was 276,682 units in September, up 3% from 267,813 units in August. CMHC uses the trend measure as a complement to the monthly SAAR of housing starts to account for considerable swings in monthly estimates and obtain a clearer picture of upcoming new housing supply. In some situations, analyzing only SAAR data can be misleading, as the multi-unit segment largely drives the market and can vary significantly from one month to the next.

Actual starts of single-family homes in urban areas – which CMHC defines as towns with populations greater than 10,000 – climbed 3% to 5,605 units in September from 5,452 units during the same month last year. This was driven by upticks across the Prairies and in British Columbia which were offset by declines in Ontario and Quebec.

However, for the first nine months of 2022, single-family starts fell 7% to 44,755 units. The declines were strongest in Quebec (-22%) and Ontario (-14%) with only Atlantic Canada and the Prairies reporting slight gains.

Meanwhile, starts in the multi-unit segment – which covers apartments, townhouses and other forms of linked housing – were up 25% in September to 18,492 units. The gains were made in every region of the country except Quebec, where they fell 31%.

For the year-to-date, multi-unit segment starts advanced a modest 1% to 135,034 units. Advances in Atlantic Canada, Ontario and the Prairies were offset by declines in Quebec and B.C.

Total housing starts for September climbed 19% to 24,097 units. Starts were up in every region of the country except Quebec, where they fell 31%.

For the year-to-date, total housing starts were pegged at 179,789 units – a 1% dip from the same period last year. Declines in Quebec, Ontario and B.C. were only marginally offset by gains in Atlantic Canada and the Prairies.

However, September’s jump on housing starts doesn’t seem to be the start of a trend as most observers believe factors such as inflation and interest rate hikes will continue to cool the overall housing market in this country.

In her research note, Rishi Sondhi of TD Economics, made a fairly typical observation: “We doubt that this robust pace can be sustained given declining sales and rising interest rates, although some offset should come from robust population growth. All told, we see starts trending lower, but remaining at healthy levels, through 2023.”