OTTAWA – Housing starts climbed on all three measures used by Canada Mortgage & Housing Corporation (CMHC) in the month of August, thanks primarily to big jump in multi-family unit construction in Ontario as activity in Western Canada fell and was, at best, flat in Quebec.

The federal housing agency reported last week the trend in national housing starts was 213,144 units in August 2020, up from 204,597 units in July 2020. The seasonally adjusted annual rate (SAAR) was also up as were actual starts for the month. But for the year-to-date, they slipped a relatively minor 1%.

“The national trend in housing starts increased for a third consecutive month in August,” Bob Dugan, CMHC chief economist said in a statement. “Higher multi-family starts in Ontario, including Toronto, drove the national increase. We expect national starts to trend lower by the end of 2020 as a result of the negative impact of COVID-19 on economic and housing indicators.” 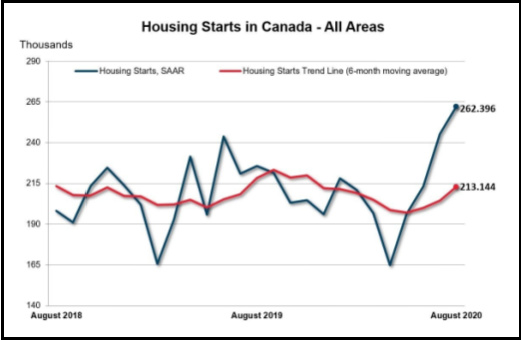 CMHC uses the trend measure to complement the monthly SAAR of housing starts as they can often be somewhat misleading because of the considerable swings in the monthly estimates driven by the multi-unit segment of the market which can vary significantly from one month to the next.

Rural starts were estimated at a seasonally adjusted annual rate of 14,242 units.

Actual starts of single-family homes in urban areas were pegged at a preliminary 4,387 units in August, down 11% from the 4,910 units started in August 2019. Regionally, they fell everywhere across the country, save in Quebec where they were essentially flat.

For the year-to-date, single-family starts were totalled at 29,584 units, unchanged from the first eight months of last year. Starts were up in Atlantic Canada and Ontario while they fell elsewhere.

Meanwhile, multi-unit starts – including apartments, townhouses and other linked dwellings for both the rental and ownership markets – were pegged at a preliminary 15,986 units for August, up 25% over the 12,803 units in August 2019. They were up in Atlantic Canada and Ontario, flat in Quebec and down across the Prairies and in British Columbia.

For the year-to-date, starts in this segment were set at 96,575 units, off a scat 1% from last year’s running total of 97,841 units. Once again, they were up in Atlantic Canada and Ontario, flat in Quebec and down across the Prairies and in B.C.

Once again, starts were flat in Quebec, fell in the Prairies and B.C. and climbed in Atlantic Canada and Ontario.

In her research note, Rishi Sondhi of TD Economics, pointed out since the onset of the pandemic this past April, the housing sector has outperformed almost every other part of the Canadian economy.

“The robust pace of homebuilding is being driven by past sales gains, with low interest rates also providing support. These factors should keep homebuilding elevated through next year as well,” she said while admitting the sector’s strength came entirely from multi-family construction in Ontario, “which is likely to pull back significantly from this multi-decade high in coming months.”

She also added a companion report on building permits showed softening in July, which could indicate some easing the in the pace of homebuilding in the short-term. “Over the medium-term, the prospect of slower population growth could weigh on homebuilding,” she said.