OTTAWA – Housing starts across the country climbed in November 2020 according to all three measures used by the Canada Mortgage & Housing Corporation (CMHC). 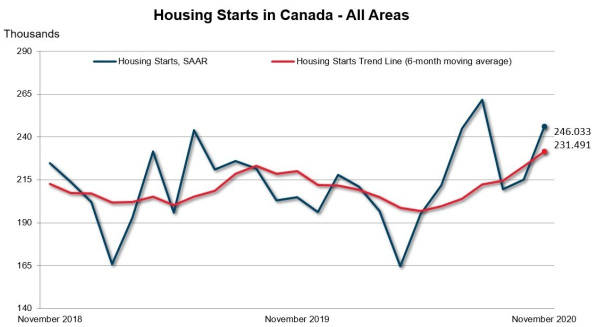 CMHC uses the trend measure to complement the monthly SAAR of housing starts and account for the often-considerable swings in monthly estimates, which are largely driven by the multi-unit segment of the market.

Rural starts were estimated at a seasonally adjusted annual rate of 12,927 units.

Actual starts in urban areas – which CMHC defines as towns and cities with populations of more than 10,000 – were also up in November.

According to the data, starts of single-family homes were preliminarily set an actual 5,105 units for the month, up 18% from the 4,382 units in November 2019. They were up in every region of the country, except the Prairies where they fell 2%.

For the year-to-date, single-family starts totalled 45,124 units – up 5% from the 43,056 units recorded for the first 11 months last year. Starts were up in Atlantic Canada, Quebec and Ontario but down across the Prairies and in British Columbia.

Meanwhile, starts in the multi-unit segment – which includes apartments, townhouses and other linked dwellings for both the rental and ownership markets – were advanced 23% to a preliminary 15,726 units in November, compared to 12,785 units for the same month last year. Starts were up everywhere but B.C.

Starts for the year-to-date were essentially flat at 138,283 units. Once again, starts were up in Atlantic Canada, Quebec and Ontario but down across the Prairies and in B.C.

For the year-to-date, CMHC set housing starts at an actual 183,407 units – up 1% over the comparable period’s 180,937 units. In an all-to-familiar pattern, starts were down across the Prairies and in B.C. and up in Ontario, Quebec and Atlantic Canada.