Home sales up in July

OTTAWA – Home sales via its Multiple Listing Service (MLS) were up for the fifth consecutive in July, according to the latest data from the Canadian Real Estate Association (CREA). However, while they were about 15% above the six-year low reached this past February, they were still more than 10% below the highs reached in 2016 and 2017.

The realtors’ group noted that national home sales were up 3.5% on a month-over-month basis in July as activity advanced in about 60% of all local markets, led by gains in both the Greater Vancouver (GVA) and Greater Toronto (GTA) areas.

They attributed much of the decline to the mortgage stress test introduced by the federal government at the beginning of 2018. 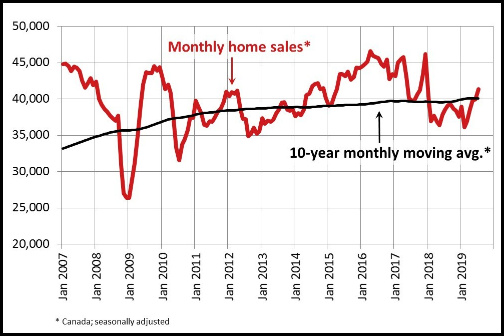 Actual (not seasonally adjusted) sales stood 12.6% above July 2018. Sales were up from year-ago levels in most of Canada’s largest markets, including the Lower Mainland of British Columbia, Calgary, Edmonton, the GTA and Hamilton-Burlington, Ottawa and Montreal.

The number of newly listed homes edged back by 0.4% in July. There was an almost even split between the number of local markets where new listings rose and those where they eased. The increase in new listings in Calgary, the GTA and Edmonton offset a decline in B.C.’s Lower Mainland and Montreal.

There were 4.7 months of inventory on a national basis at the end of July 2019 – the lowest level since December 2017.

CREA noted while national measures indicate supply and demand for homes are fairly well balanced, there are significant regional variations.

The number of months of inventory has swollen far beyond long-term averages in both the Prairie provinces and Newfoundland & Labrador, giving homebuyers ample choice in these regions. By contrast, the measure remains well below long-term averages in Ontario and Maritime provinces, resulting in increased competition among buyers for listings and fertile ground for price gains.

The national average price is heavily skewed by sales in the GVA and GTA, Canada’s most active and expensive housing markets. Excluding them trims it to less than $393,000.

In his research note, James Marple of TD Economics described July as “a solid month” for the Canadian housing market.

“As they have in the past, strong population growth, solid job growth and lower mortgage rates appear to be doing the job of supporting Canadian housing demand,” he said. “With most markets in balanced territory or better, the immediate downside risk to home prices have diminished considerably. While affordability will remain a constraint in major high-priced markets, prices appear more likely to increase than decrease over the next year.”

Marple cautioned that current conditions will raise some challenges for the Bank of Canada as its struggles with all important question of interest rates over the coming months. While the Canadian economy continues to perform reasonably well, recent evidence suggests global economic growth is even softly than previously thought.