Home sales up in February

OTTAWA – Home sales via the Multiple Listing Service (MLS) made solid gains in February on both a month-over-month and year-over-year basis, according to the latest figures from the Canadian Real Estate Association (CREA). The number of new listings was also up as was the national average selling price although commentators expect the market to slow in reaction to the ongoing COVID-19 health emergency.

The realtors’ group noted national home sales climbed 5.9% in February over January while actual (not seasonally adjusted) sales leapt 26.9% over a “quite weak” February 2019, which set decade-low mark for the second month of the year. The number of properties listed for sale climbed 7.3% month-over-month.

CREA noted transactions were up in about 60% of all local markets in February, largely the result of a 15% jump in activity in the Greater Toronto Area (GTA). 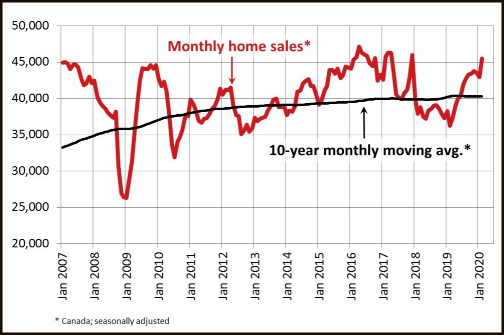 “Home prices are accelerating in markets where listings are in increasingly short supply, specifically in Ontario, Quebec and the Maritimes which together account for about two-thirds of national sales activity,” CREA president Jason Stephen said in a statement. “Meanwhile, ample supply across the Prairies and in Newfoundland and Labrador means increased competition among sellers.”

“Following a quieter than normal December/January period, February saw a burst of new listings in some of Canada’s most supply-starved markets, so it was not a surprise that sales were up alongside that increase in new supply,” CREA senior economist Shaun Cathcart added. “There is some question about how much pent-up demand remains in parts of the country where listings have been low for some time now. That said, it will take more than one month of increased new listings to even start to turn some of these markets towards some semblance of balance. In the meantime, expect competition among buyers for available listings to continue to drive prices higher.”

CREA noted while its sales-to-new-listings ratio eased slightly in February, it has remained significantly higher than its long-term average for the past five months, suggesting prices will continue to post further gains over the rest of the year.

Also aiding in the strengthening of a sellers’ market nationally is the shortening its ‘months of inventory’ measure, which at 4.1 is a full month below it’s long-term average.

There are also significant regional differences in the market. For example, the ‘months of inventory’ measure has swollen far beyond the long-term average in the Prairie provinces and Newfoundland & Labrador. By contrast, its well below in Ontario, Quebec and the Maritime provinces, resulting in increased competition among buyers and providing fertile ground for price gains. The measure remains in balanced territory in British Columbia.

The actual (not seasonally adjusted) national average price for homes sold in February 2020 was around $540,000, up 15.2% from the same month the previous year. Excluding the GTA and the Greater Vancouver Area – this country’s most active and expensive housing market – from the calculation, cuts the national average price to around $410,000.

In her research note, Rishi Sondhi of TD Economics, noted CREA’s report points to a solid underlying demand for housing in Canada.

“However, conditions changed significantly in March due to the spread COVID-19,” she was quick to add. “As such, activity is likely to slow substantially in the near-term, if not retrench. Growth in new listings are also likely to be impacted, muting the impact on prices from declining demand.

“That said,” she continued, “sales are well-positioned to make a strong recovery once the impact of the virus dissipates, helped by an ultra-low interest rate environment. With resale markets generally tight, we expect a rebound of sales activity that brings strong price growth once COVID-19 is convincingly in the rear-view mirror.”