OTTAWA – Sales via its Multiple Listing Service (MLS) climbs for the third consecutive month in May, according to data released by the Canadian Real Estate Association (CREA), although its senior executive continued to criticize the mortgage stress test believing it is holding back many first time buyers by forcing them to save larger down payments.

The realtors’ group noted sales via the MLS rose by 1.9% in May over April 2019 and reached their highest level since January 2018. However, sales were only up in half of all local markets, but they included both the Greater Vancouver (GVA) and Greater Toronto (GTA) areas, the country’s two largest housing markets. 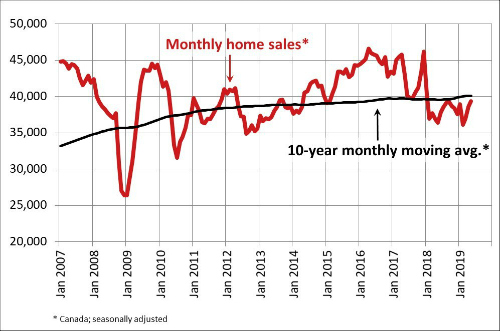 Actual sales (not seasonally adjusted) were up 6.7% compared to May 2018, marking the largest year-over-year gain recorded since the summer of 2016. While about two-thirds of local markets posted gains for the month, the national increase was dominated by improving sales trends in the GTA, which accounted for close to half of the overall increase.

“The mortgage stress-test continues to present challenges for home buyers in housing markets where they have plenty of homes to choose from but are forced by the test to save up a bigger down payment,” CREA chief economist Gregory Klump said in a statement. “Hopefully, the stress-test can be fine tuned to enable home buyers to qualify for mortgage financing sooner without causing prices to shoot up.”

The number of newly listed homes slipped 1.2% in May. With sales up and new listings down, the national sales-to-new listings ratio tightened to 57.4% in May compared to 55.7% in April. That said, the measure is still within close reach of its long-term average of 53.5%.

CREA noted housing market balance varies significantly by region across the country. For example, in the Prairies and Newfoundland & Labrador, the number of months in inventory (the estimated time it takes to sell a house) has swollen far beyond its long-term average. By contrast, the measure remains well below its long-term average for Ontario and Maritime provinces – making both fertile ground for price gains.

In his research note, Rishi Sondhi of TD Economics said CREA’s sales report for May “is yet another sign that housing demand has stabilised after a weak 2018.”

"Home sales continued their improvement in May, stoked by healthy labour markets and the recent slide in mortgage rates,” he continued, adding, “Furthermore, markets have had additional time to adjust to federal and provincial policy measures, which weighed significantly on activity last year.”

Sondhi also pointed out housing sales are now sitting 4% above their average for the first quarter of the year, a good sign for overall Canadian economic performance as the first half of 2019 comes to a close.

“Moving forward, we look for sales to trend higher, lifted by a rising population, a more stable rate environment and supportive federal measures,” he added.