Home sales to fall this year

OTTAWA – Home sales activity via its Multiple Listing System (MLS) are forecast to fall for the second consecutive year in 2023 before making a slight rebound in 2024, the Canadian Real Estate Association (CREA) said in its latest forecast.

The association noted national home sales have been more or less stable since the summer, suggesting the downward adjustment to sales activity from rising interest rates and high uncertainty may be in the rear-view mirror. 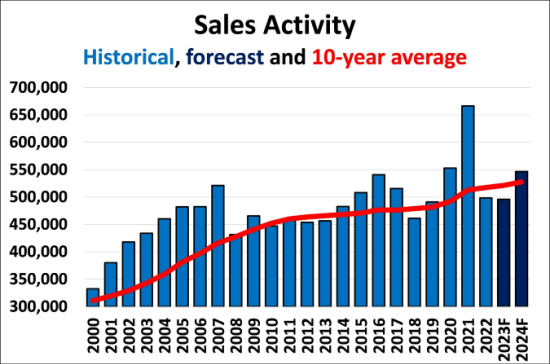 “Home prices remain mixed across Canada. With significantly higher borrowing costs, it’s not surprising prices have mostly cooled from their peaks in more expensive markets within Ontario and British Columbia,” the forecast said. “Prices have been holding up much better in Alberta, Saskatchewan and Newfoundland & Labrador, with Quebec and the Maritime provinces landing somewhere in between. While prices in most markets have declined from a short-lived sharp peak in early 2022, they remain well above where they were in the summer of 2020.”

With the shock from the Bank of Canada’s efforts to control inflation fading, and uncertainty about the path for housing markets and where borrowing costs will ultimately land also likely to wind down over the next few months, CREA said the theme for its 2023 forecast is not recovery, but the start of a turnaround.

However, they concede it is likely to remain difficult for many first-time buyers to enter the housing market until mortgage rates are lower. That said, some buyers are expected to come off the sidelines once they are more certain rates have topped out. Others will likely find 2023 the first opportunity in some time where they’re not having to compete with multiple offers.

Some 495,858 properties are forecast to trade hands via the Canadian MLS in 2023, a 0.5% decline from 2022. At one time, studies showed a typical home sale generated $6,500 in sales of furniture and appliances in the 12 to 24 months after closing. This should translate into industry revenue of approximately $3.24 billion this year.

“It’s important to note that based on the monthly data under the surface, that decline has already happened over the course in 2022; however, the record setting start to that year will be reflected as a decline this year as prices are not expected to be anywhere near those record levels in 2023,” the forecast said.