Home sales slow again in May

OTTAWA – In yet another sign this country’s housing market is cooling, the Canadian Real Estate Association (CREA) reported last week sales via its Multiple Listing Service (MLS) declined in May, on both a month-over-month and year-over-year basis. However, the number of newly listed properties for sale and the national average price were both up over the comparable month last year.

The realtors’ group said home sales recorded over the MLS declined by 8.6% between April and May 2022. This built on a larger drop recorded in April, leaving monthly activity at pre-COVID levels recorded in the second half of 2019 and only slightly above the 10-year average.

Sales were down in three-quarters of all local markets, led by a number of larger census metropolitan areas (CMAs) including those in the Lower Mainland, Calgary, Edmonton, the Greater Toronto Area (GTA) and Ottawa. 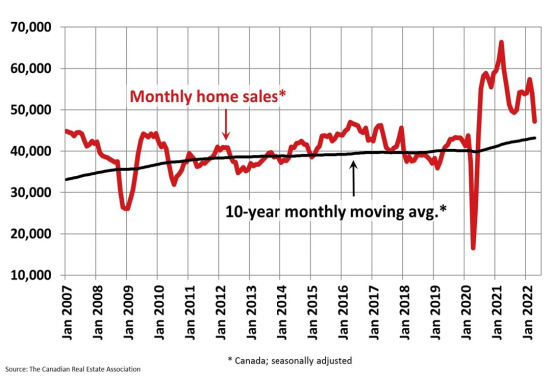 The actual number of transactions in May 2022 came in 21.7% below the record set for the month last year. At a little over 50,000 units sold, the May 2022 sales figure was very close to the 10-year average for the fifth month of the year.

“May picked up where April left off, with sales activity continuing to slow and softening prices in many parts of the country,” CREA chairman Jill Oudil said in a statement. “Inventories are finally beginning to rebuild from record lows just a few months ago, although we still have major supply shortages almost everywhere. With all that being said, we are in a period of rapid change, but one that should settle to a more balanced housing market in time.”

“Ultimately this has been expected and forecast for some time – a slowdown to more normal levels of sales activity and a flattening out of prices,” CREA senior economist Shaun Cathcart added. “What is surprising is how fast we got here. With the now very steep expected pace of Bank of Canada rate hikes, and fixed mortgage rates getting way out in front of those, instead of playing out steadily over two years, that cooling off of sales and prices seems to have mostly played out over the last two months.”

The number of newly listed homes climbed 4.5% on a month-over-month basis in May. The monthly increase was influenced by a jump in new supply in Montreal, while new listings in the GTA posted a small decline.

There were 2.7 months of inventory on a national basis at the end of May,  still historically low but up from the tightest conditions ever recorded just six months ago. The long-term average for this measure is a little over five months.

In her research note, Rishi Sondhi of TD Economics, opined “home sales and prices continued to decline under the weight of higher interest rates. In addition, there may have been some downward pressure from buyer fatigue, after sales were pulled-forward to beat higher rates in late 2021/early 2022.”

She also pointed out there’s a regional story underneath the national headline, with sales and prices down disproportionately in Ontario and B.C. – areas which suffered severe affordability deteriorations during the pandemic.

As an aside, Sondhi remarked that activity is retrenching hard in the GTA, where investors have played a relatively large role in the market over the past year. “It’s also likely the case that some GTA buyers purchased their homes before selling their old ones (thinking the market would remain hot) and are now being forced to accept lower prices to complete their transactions,” she observed, adding, “We would, however, expect this dynamic to run its course in relatively short order.”

The real estate market, she continued, has softened in Alberta since February, although sales levels are still quite elevated while sales have declined to a lesser degree across most of the Prairies. They have also moved higher in Atlantic Canada, supported by robust population growth.

“Moving forward, we expect Canadian average home prices to trend even lower through the rest of the year, reflecting sharply higher interest rates. Compositional effects should also continue to negatively influence average prices, as the exorbitant run-up in prices for more expensive units (like detached homes) during the pandemic gives way to a steeper decline,” she forecast.