OTTAWA – Home sales via its Multiple Listing Service (MLS) rose in January when compared to December but were down 4% from January 2018, the Canadian Real Estate Association (CREA) reported late last week. While new listings were up month-over-month, the average price fell 5.5% on a year-over-year basis.

The realtors group said sales climbed 3.6% in January 2019 compared to December 2018 as the number of homes trading hands was up in half of all local markets led by Montreal, Ottawa and Winnipeg.

Actual (not seasonally adjusted) were down 4% from year-ago levels and turned in the weakest January since 2015. They also came in below the 10-year average for the month on a national basis and in Canada’s three westernmost provinces, Ontario and Newfoundland & Labrador. 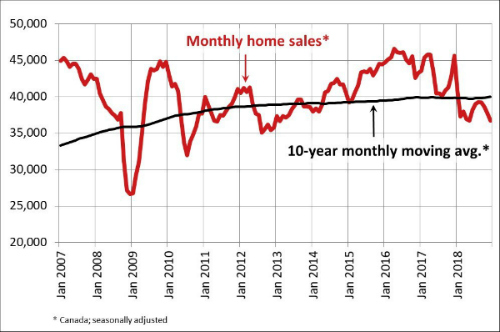 “Sales, market balance and home price trends are out of synch among major Canadian cities that have the greatest impact on national results,” CREA chief economist Gregory Klump added. “It's clear that housing market conditions remain weaker in the Prairie region and the Lower Mainland of British Columbia. Notwithstanding the intended consequences, tighter mortgage regulations that took effect in 2018 combined with previous tightening will weigh on economic growth this year.”

The number of newly listed homes edged up 1% in January, led by a jump in new supply in Greater Vancouver and Hamilton-Burlington.

With sales up by more than new listings, the national sales-to-new listings ratio tightened to 56.7% compared to last month’s 55.3% – remaining close to it’s long-term average of 53.5%.

However, regional disparities are beginning to show in another of CREA’s measures of market balance – the number of months of inventory, which represents how long it would take to liquidate current inventories at the current rate of sales.

“Toronto’s gain lends credence to the view that activity is stabilising – albeit at low levels – with firm economic conditions and robust population gains forming a solid fundamental base for demand,” he wrote, adding, “Vancouver’s increase – while heartening – only modestly retraced the outsized declines observed in the prior two months, meaning that patience is required before calling a bottom in this market. Meanwhile, Montreal’s robust sales gain left its market the tightest it's been since at least 2000. This points to solid price growth being sustained in coming months, with the knock-on effect being a further deterioration in affordability. This will be a story to watch going forward.”

Coupled with the recent healthy home building report, Sondhi said, this suggests the housing market should continue to bolster overall economic growth in the first quarter of 2019 although he expressed concerns about softening price growth, particularly in British Columbia and the oil producing provinces.

“This puts some downside risk on our forecast for home price growth in 2019,” he said, while noting the report offers some evidence Canadian consumers are adjusting to rising interest rates. “This should provide some comfort to the Bank of Canada, particularly with their recent emphasis on housing market developments helping shape interest rate policy. However, it will take more than one month of decent housing data to shift policymakers from their current patient stance, with the next rate hike likely to be delayed until late in 2019.”