OTTAWA – In yet another sign this country’s housing market is beginning to cool, national home sales edged back in August from July and fell 14% on a year-over-year basis, according to the latest figures from the Canadian Real Estate Association (CREA).

The realtors’ group reported last week that sales over its Multiple Listing Service (MLS) slipped 0.5% on a month-over-month basis in August, saying “transactions appear to be stabilizing at more sustainable but still historically active levels.”

There was a fairly even split between the number of local markets where sales were up and those where they were down. Small declines in the Greater Toronto Area (GTA) and Montreal were offset by gains in the Fraser Valley, Quebec City and Edmonton.

CREA also reported the actual number of transactions in August 2021 was down 14% on a year-over-year basis from the record set for that month last August although it was still the second-best month of August in history. 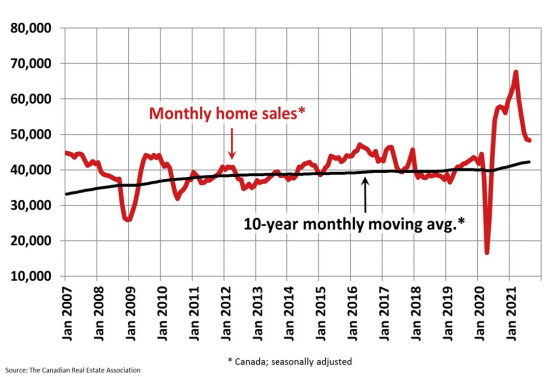 “Canadian housing markets appear to be stabilizing somewhere in between pre- and peak-pandemic levels – which is to say, still extremely unbalanced,” CREA senior economist Shaun Cathcart said in a statement.

He also applauded the discussions centreing around the building of more homes during the federal election campaign, noting “at least we are finally having the right conversation.

“But as anyone who has tried to get even a small project done in the last year knows, availability of materials and skilled labour are not dials that can simply be turned up to 11 whenever we decide we need them,” he continued, adding, “And that’s not to mention all the other barriers to building, of which there are many. It’s definitely easier said than done.”

New listings were up 1.2% in August compared to July. As with sales, there was a fairly even split between markets seeing declines and those seeing gains. Among the larger Canadian markets, new supply declines in the GTA and Ottawa were offset by gains in Vancouver and Montreal.

With both sales and new listings relatively unchanged in August, the sales-to-new listings ratio remained a tight 72.4% compared to 73.6% in July. The long-term average for this measure is 54.7%, meaning a small majority of local markets remain in seller’s market territory. The remainder are in balanced territory.

There were 2.2 months of inventory on a national basis at the end of August 2021, down slightly from the prior month. This is half of this measure’s long-term average and indicative of a strong seller’s market in most local markets.

Excluding this country’s two largest and more active markets – the GTA and Greater Vancouver – cuts over $130,000 from the national average price.