OTTAWA – Home sales via its Multiple Listing Service (MLS) during the month August were up 1.4% over those recorded in July and up 5% on a year-over-year basis, according to the latest report from the Canadian Real Estate Association (CREA). Listings were up 1.1% month-over-month and the actual national average price gained 3.9% over August last year.

The realtors group also reported while sales advanced for the sixth consecutive month in August and transactions are running almost 17% above the six-year low reached in February 2019, they remain about 10% below highs reached in 2016 and 2017.

Activity was up in slightly more than half of all local markets, including the Lower Mainland of British Columbia, Calgary, Winnipeg, the Greater Toronto Area (GTA), Ottawa and Montreal. 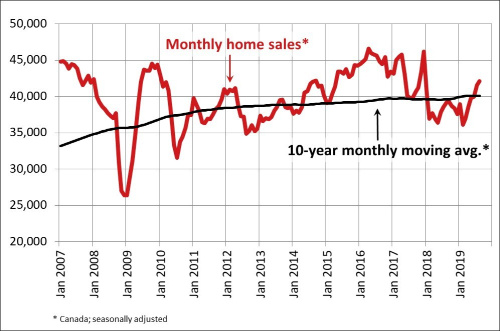 As it has since before it was introduced by the federal government in early 2018, CREA asserted mortgage stress-test continued to negatively impact the housing market by reducing the ability of some first-time home buyers to enter the market. However, the recent drop in mortgage rates has offset that impact to some extent.

“The recent marginal decline in the benchmark five-year interest rate used to assess homebuyers’ mortgage eligibility, together with lower home prices in some markets, means that some previously sidelined homebuyers have returned,” CREA chief economist Gregory Klump said in a statement. “Even so, the mortgage stress-test will continue to limit homebuyers’ access to mortgage financing, with the degree to which it further weighs on home sales activity continuing to vary by region.”

The number of newly listed homes rose 1.1% in August. With sales and new supply up by similar magnitudes, the national sales-to-new listings ratio was 60.1% – essentially unchanged from July. CREA said the measure is above its long-term average of 53.6%, indicating a tighter balance between supply and demand and a growing potential for price gains.

The association also reported the months of inventory was 4.6 at the end of August – the lowest level since December 2017. This measure of market balance has been increasingly retreating below its long-term average of 5.3 months.

However, that measure of market balance masks significant regional variations. It has swollen in the Prairie provinces and Newfoundland & Labrador, giving homebuyers ample choice in these regions. By contrast, the measure is running below the long-term average in Ontario, Quebec and Maritime provinces, resulting in increased competition among buyers, making fertile ground for price gains. Meanwhile, the measure is well centred in balanced territory in the Lower Mainland of British Columbia, making it likely prices there will stabilize.

The national average price is heavily skewed by sales in the GVA and GTA – Canada’s most active and expensive housing markets. Excluding them trims it to less than $393,000 and reducing the year-over-year gain to 2.7%.

“And, with sales still somewhat low compared to population and employment levels, the recovery likely has further room to run,” he continued, adding, “Our forecast anticipates positive sales growth through next year, contingent on the economy and job markets holding up.”

Sondhi also noted that so far in the third quarter, sales are 6.1% higher than in the second quarter, meaning that in addition to strong homebuilding, residential investment should make a solid contribution to overall economic growth.

“As activity has improved, housing markets across the country have become tighter,” she continued. “This suggests that further growth in home prices is likely, although affordability challenges in Toronto, Vancouver and some surrounding regions should cap gains in these markets.”