OTTAWA – On seasonally adjusted basis, national homes sales via the Multiple Listing Service of the Canadian Real Estate Association (CREA) showed in small increase in August over July. But on an actual  year-over-year basis, sales fell in yet another demonstration that, while experts agree it’s still healthy, the housing market in this country is cooling.

The realtors group reported on a month-over-month basis, sales edged up 0.9% in August, marking the fourth consecutive month of gains. Roughly half of all local markets recorded an increase in sales from July to August, led again by the Greater Toronto Area (GTA), along with gains in Montreal and Edmonton.

Actual activity was down 3.8% year-over-year in August, due mainly to declines in major urban centres in British Columbia. 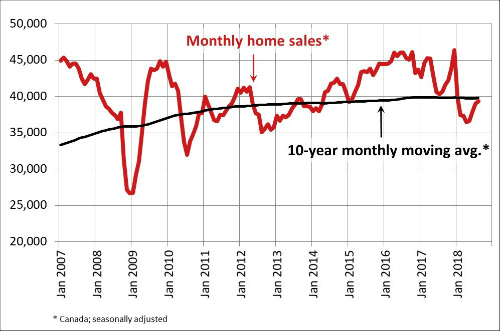 The number of newly listed homes was unchanged between July and August, as new supply gains in the Greater Vancouver Area (GVA) and Montreal offset declines in the GTA and Winnipeg.

With sales up slightly and new listings unchanged, the national sales-to-new listings ratio edged up to 56.6% in August compared to 56.2% in July. The long-term average for this measure of is 53.4%.

The actual national average price for homes sold in August 2018 was just over $475,500 – up 1% from the same month last year. The average price has made gains in each of the past five months.

In his research note, Rishi Sondhi of TD Economics said CREA’s August sales report makes its clear housing markets are moving past the government-induced weakness imposed on them earlier this year.

“Questions now centre on the path of the recovery going forward,” he said. “Our view is that sales and prices will continue to grow, but that rising borrowing costs will restrain the pace of expansion. This is particularly true for more expensive markets in Ontario and B.C. where affordability pressures are acute.”

He was also encouraged by signs that B.C.’s market is bottoming out after a period of weakness.

“From the standpoint of overall economic growth, rising resale activity should ensure that residential investment adds to third quarter GDP after subtracting, on average, in the prior two quarters,” Sondhi concluded.