OTTAWA – The bottom fell out of the resale housing market in April as the efforts to combat the COVID-19 pandemic prompted both buyers and sellers to obey doctors’ orders and stay home. Statistics released by the Canadian Real Estate Association (CREA) show national home sales and new listings via its Multiple Listing Service (MLS) fell by half in April over March.

The realtors’ group said national home sales fell 56.8% in April compared to an already weakened March. They were also down 57.6% compared to April 2019 – marking the lowest sales for the month since 1984 – as the actual (not seasonally adjusted national average price fell 1.3% year-over-year.

Furthermore, new listings were down 55.7% in April over March. 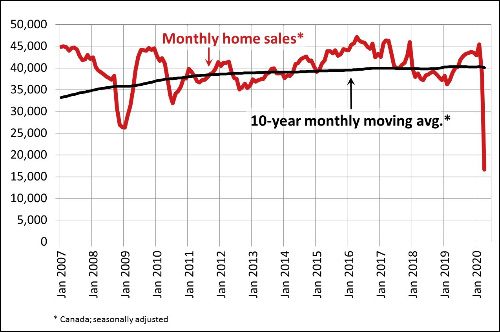 “Like so many other parts of normal daily life, a lot of buying and selling activity in housing markets across Canada has been put on pause,” CREA senior economist Shaun Cathcart said in a statement, adding the adoption of new virtual technology tools has prompted an uptick in both sales and listings in the early weeks of May.

The national sales-to-new-listings ratio was 62.4% in April, down slightly over the prior two months. CREA said this measure of market balance hasn’t changed significantly because both buyers and sellers have been equalled impacted by the COVID-19 crisis.

However, its other measure of market balance – the number of months of inventory – leaped from 4.3 months in March to 9.2 in April. “The jump in this measure reflects the fact that sales were expected to fall right away in this situation; whereas a stock variable like active listings would be expected to fall much slower, even if it was falling at the fastest pace on record as of April,” CREA’s report said, adding, “Anecdotal evidence suggests many sellers who already had homes on the market before mid-March may have left the listings up for now but drastically curtailed the extent to which they were actively trying to sell during the lockdown. Going forward, many of these listings will simply be allowed to expire or may be withdrawn. As such, we may see this measure of market balance head back down in the months ahead.”

Excluding the GTA and GVA – this country’s most active and expensive housing markets – trims the national average price to less than $392,000.

In his research note, Brian DePratto of TD Economics pointed out CREA’s report confirmed the market’s expectations “namely that the pandemic drove sales to historically depressed levels. Not only did buyers retreat to the sidelines in record numbers, so too did sellers.”

However, he cautioned housing market activity is likely to remain soft for at least the next few months.

“With April in the rear-view, we can start talking about ever so tentative improvements in sales activity as provinces begin to gradually re-open their economies,” DePratto said, adding, “We do expect sales to remain depressed for a few months longer as job markets slowly improve and buyers remain cautious, but a normalization process is likely already underway.”