OTTAWA – Although existing home sales via its Multiple Listing Service (MLS) edged a little higher in October 2022 when compared to the previous month, they plummeted 36% on a year-over-year basis, according to the latest figures from the Canadian Real Estate Association (CREA). Meanwhile, the national average price fell 9.9% over that in October 2021.

The realtors’ group noted sales gained a slight 1.3% between September and October 2022, noting “While not a large increase, it was significant in that it was the first monthly gain since February.”

About 60% of all local markets saw sales rise in October, although both gains and declines were generally small across the board. The largest gain, a 6% increase in the Greater Vancouver Area (GVA), was offset by a 2.4% decrease in activity in Montreal. 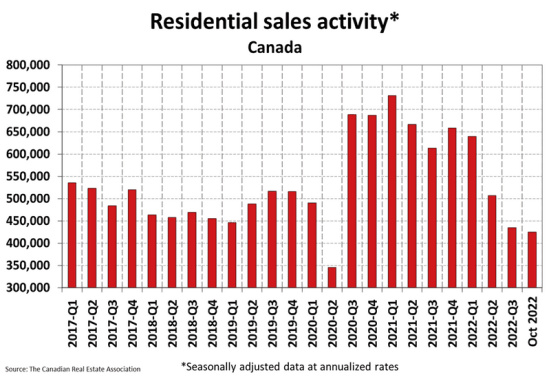 The actual (not seasonally adjusted) number of transactions in October 2022 came in 36% below that same month last year and stood about 15% below the pre-pandemic ten-year average for the month.

“In October, sales across the country increased for the first time since before interest rates started to rise last winter,” CREA chairman Jill Oudil said in a statement. “Of course, we’ve known the demand was there, so it’s just been a matter of some playing the waiting game as borrowing costs and prices have adjusted. Moving into 2023, sellers and buyers will likely continue coming off the sidelines, but it’s a very different market compared to just one year ago.”

“October provided another month’s worth of data suggesting the slowdown in Canadian housing markets is winding up,” CREA senior economist Shaun Cathcart added. “Sales actually popped up from September to October, and the decline in prices on a month-to-month basis got smaller for the fourth month in a row.”

The number of newly listed homes was up 2.2% on a month-over-month basis in October, with gains in the Greater Toronto Area (GTA) and the B.C. Lower Mainland offsetting declines in Montreal and Halifax-Dartmouth.

With sales up by a little less than new listings in October, the sales-to-new listings ratio eased back to 51.6% compared to 52% in September. The long-term average for this measure is 55.1%.

Excluding this country’s two most active and expense markets – the GVA and the GTA – from the calculation, reduces the national average price by about $125,000.

“Absent further rate hikes, one could make the case that Canadian housing demand is approaching a bottom,” Rishi Sondhi of TD Economics observed in her research note. “Sales have already cratered by over 40% since February, are trending at levels last consistently seen in 2012, and appear to have undershot levels in line with fundamentals like income and housing supply.”

Even though sales were up in October, she added, “However, we do anticipate further rate hikes by the Bank of Canada, which will continue to weigh on demand and prices. In fact, they should continue dropping through the early part of next year.

“Our current forecast sees Canadian average home prices retracing about half of the gains made during the pandemic, although how the supply picture unfolds represents a key risk to this forecast,” she said. “With homeowners feeling the pinch of higher monthly payments due to rising interest rates, some may be forced into listing their properties (although so far, the level of new supply hitting the market each month remains subdued). If a sufficiently large number of these homeowners end up listing their homes, it could downwardly pressure prices by more than we anticipate.”

Related Story: Actual housing starts up for October, but flat for the year