OTTAWA – Figures released by the Canadian Real Estate Association (CREA) show national home sales via its Multiple Listing Service (MLS) remained historically high in December 2021, as the end-of-month supply of properties for sale hit an all-time low which will several complications to the market as 2022 opens, particularly around affordability.

The realtors’ group noted sales inched up slightly in December over November, but fell 9.9% from the record posted in December 2020. However, sales in December 2021 were still at the second-highest level recorded for the month.

On a month-over-month basis, most of the country’s large markets reflected the national trend of little change between November and December except for Calgary and the Fraser Valley of British Columbia which both reported gains.

CREA reported a total of 666,995 residential properties traded hands via the MLS in 2021. This was a new record by a large margin, surpassing the previous annual record set in 2020 by a little more than 20%, and standing 30% above the average of the last 10 years. 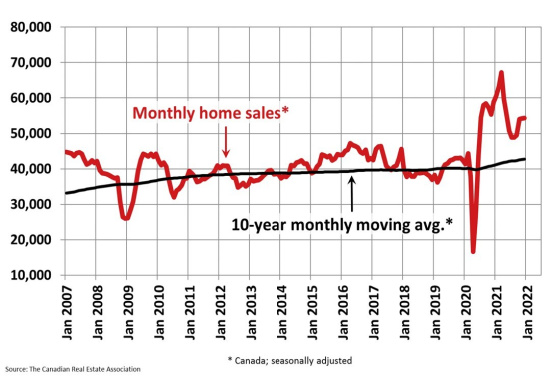 “With the housing supply issues facing the country having only gotten worse to start 2022, take any decline in sales early in the year with a grain of salt because the demand hasn’t gone away, there just won’t be much to buy until a little later in this spring,” CREA chairman Cliff Stevenson said in a statement.

“There are currently fewer properties listed for sale in Canada than at any point on record,” CREA senior economist Shaun Cathcart noted. “So unfortunately, the housing affordability problem facing the country is likely to get worse before it gets better. Policymakers are starting to say the right things, but now they have to act to change this course we’re on. An aggressive national push to build more homes is what will address the issue, but it will probably have to be a greater amount of building than anything we've ever undertaken. A touch over the status quo won’t cut it.”

The number of MLS listings fell 3.2% in December compared to November, with declines in Greater Vancouver, Montreal and a number of other areas in Quebec more than offsetting an increase in new supply in the GTA.

The association also noted there were just 1.6 months of inventory on a national basis at the end of December 2021 — the lowest level ever recorded. The long-term average for this measure is a little more than five months.

In her research note, Rishi Sondhi of TD Economics suggested December’s record home sales could be driven, at least partially, by buyers seeking to secure mortgages in advance of looming hikes in interest rates, which are expected sometime this year.

“How long this effect will last is uncertain, but it should eventually fade,” she said, adding, “With interest rates set to climb, we look for some froth to come out of sales activity this year. However, solid macro conditions, coupled with a highly elevated price backdrop (which is likely causing buyers to act now rather than later), should sustain sales above pre-pandemic levels.”

Sondhi also pointed out new listings have not kept pace with sales. “In fact, the number of homes newly listed last year was below levels that generally prevailed before the pandemic struck. It could be that a lack of supply is perpetuating itself, in that potential sellers who would be more active in ‘normal’ times are holding back their listings due to a dearth of inventory to relocate to, and intense competition for available properties,” she said.

“With interest-rate pull-forward behaviour keeping demand so strong, and supply struggling to keep up, its little wonder why prices are continuing their relentless upward march,” she continued, opining while prices will likely increase this year, higher interest rates should slow their pace, particularly among investors who tend to be more sensitive to them.