ST. JACOBS, Ontario – For the second time in his career, Shawn Matheson, a professional truck driver with Home Hardware Stores Limited was named Grand Champion at this year’s Ontario Truck Driving Championships in Kingston. He ended the competition with the highest overall score and placed first in the Tandem-Tandem category.

He was also named Grand Champion in 2010 and – along with Bryon Winfield, who placed first in the Single Tandem division – will represent Team Ontario at the National Truck Driving Championships in Brantford, Ontario on September 17, 2016. 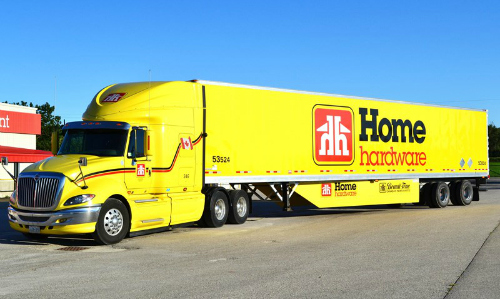 The Ontario Truck Driving Championships require drivers to compete in a series of competitive tests that measure the driver’s knowledge of rules of the road, safety courtesy and efficiency in vehicle handling. They include a written test, pre-trip inspection and driving competition.

“I could not be more proud of our professional drivers,” Dennis Shantz, director of fleet services for Home Hardware said in a statement. “Great results do not happen by accident, our drivers spend numerous hours practicing in the yard during the week and on weekends leading up to the competition. As a leader in the trucking industry, I am thrilled to see two of our drivers advance to the National Truck Driving Championships this September.”

In its announcement, Home Hardware said takes its commitment to safety very seriously. All of Home’s drivers receive defensive driver training and Transportation of Dangerous Goods training every three years.  The company also offers a Safe Driving Awards program as well as a bonus program to reward good driving.

Home Hardware operates a fleet of 140 power units and over 500 trailers that travel across Canada delivering product to almost 1,100 stores while covering approximately 18 million kilometres a year. The fleet is based at its four distribution centres in St. Jacobs and Elmira, Ontario; Debert, Nova Scotia; and Wetaskiwin, Alberta.

Home Hardware is the parent company to Home Furniture.