TORONTO – Leon’s has once again turned to its own customers to be both the inspiration and the source of its latest advertising and promotion effort with the recent online publication of Hello Sunshine, their guide to what really makes a happy home.

It’s the second in a series of digital publications – called a look book – created by Leon’s team of Hello Yellow bloggers, according to Autumn Hachey, social media manager for the banner, one of two owned and operated by publicly-held Leon’s Furniture Limited (the other being The Brick).

“The Hello Yellow blog is a lifestyle and home blog powered by influencers that shares helpful tips and tricks for a happy home,” Hachey explains, adding, “The Hello Sunshine look book is an extension of the blog – one where we turn those blog posts into magazine-like content in an easy to read format.” 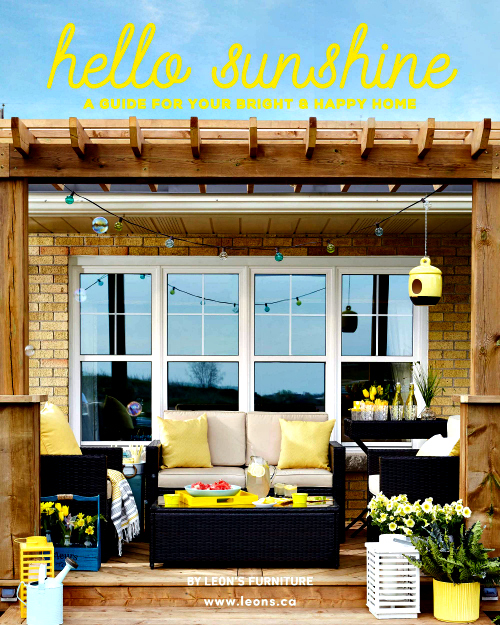 Published in late June and available through the Leon’s website, the 90-page digital look book not only features written content from these bloggers – who are real people living in various communities across Canada who already publish their own blog and have an interest in home furnishings, furniture and décor – but also photographs taken in their own homes.

“There are no ‘studio’ shots within this look book,” Hachey says, adding, “All of the product shown in the look book is shop-able (that is, everything shown can either be found on the floor at Leon’s or on its web site).”

The content intertwines projects and stories from the blog into something Hachey hopes will inspire the consumer. “The entire look book has a ‘real life’ lens to every story, which is about more than just aesthetics – it’s about real life and how, for these people, Leon’s has become part of the family.”

Hachey can’t stress strongly enough that Hello Sunshine isn’t a typical advertorial magazine or catalogue. “It’s about the stories first and the product second,” she maintains. “Also, the projects, tips and life lessons that are sprinkled throughout its pages to keep it engaging and interesting wouldn’t be found in a typical catalogue.”

The current team of influencers are six women bloggers from different parts of Canada and all are in different stages of life. “One of our bloggers has kids in diapers while another’s are just graduating from high school,” Hachey says, adding each gives a slightly different perspective to the issues around creating a home.

Already known as one of the most aggressive advertisers in the Canadian furniture industry, Leon’s is also using Hello Sunshine and its blogger network to leverage its efforts on social media, particularly the more visual platforms such as Facebook, Instagram and Pinterest – which Hachey describes as the Google for visual content.

“We have media buys planned for Hello Sunshine on Facebook, Instagram and most excitingly – Pinterest,” Hachey says. “We are very excited to be one of the first Canadian retailers to really leverage Pinterest in Canada.”

Leon’s actually published its first look book – called Hello Holiday – last November, which Hachey said was a great success, so much so that the company plans to publish another this fall and making the look books a regular part of its promotional calendar. “We’re currently in negotiations to include a printed version as well as the first two were digital only,” she adds.

The current issue of Hello Sunshine is furniture focused, something Hachey says will change in future issues, which will include coverage of mattresses, major appliances and possibly even electronics.

Click here to check out the Summer 2016 edition of Hello Sunshine.

Click here to check out the Hello Yellow blog.