The lease-to-own business has changed radically over the past decade or so. Forty years ago, most couples starting out in life thought nothing of renting their first television. After all, in those days these electronic devises were expensive in relation to the family income. But in many ways, they aren’t all that different from traditional retailers and are subject to same economic forces.

When we profiled David Ingram, then president and chief executive officer of Easyhome back in 2011, he stressed they were, indeed, retailers. “We see ourselves as retailers because we do all of the things that retailers do,” he told us back then. “How we fund the sale is what makes us different.”

It should be noted he’s now executive chairman of GoEasy, the corporate parent fashioned in 2015 to house both Easyhome and Easyfinancial, the short-term consumer loan specialist launched in 2006. 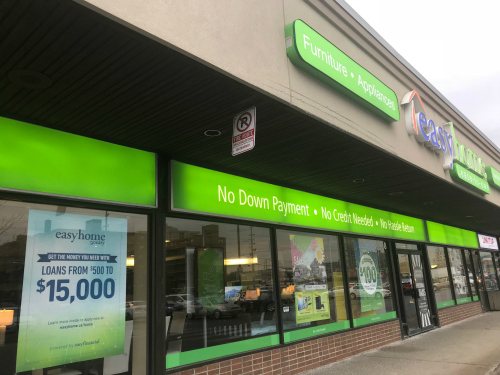 Since the financial crisis of 2008, Easyfinancial has been the company’s star performer. It’s grown exponentially over the past few years and has captured the attention – and the adoration – of Bay Street analysts. In 2018, Easyfinancial accounted for 72.8% of GoEasy’s total revenue. That’s $368.3 million of $506.2 million. The year prior, it accounted for 65.8% total revenue.

Easyfinancial’s loan portfolio is expected to break through the $1 billion barrier sometime in the next 18 months or so. In fact, when reading GoEasy’s quarterly and annual reports – it’s one of the four publicly-held furniture retailers in this country (the others being Leon’s Furniture Limited; Sleep Country Canada Holdings; and, BMTC Group) – one could easily come to the conclusion Easyfinancial is the only part of the company that matters.

But senior management says that’s not true. Easyhome remains the beating heart of the company and the foundation on which everything else is built.

It’s true Easyhome hasn’t fared as well in recent years even though it remains this country’s largest big-ticket leasing merchant. Until last year, when sales recorded a modest uptick, they had fallen in each of the past five years from $158.3 million in 2014 to $137.7 million in 2018.

Easyhome has also seen its store count drop from 192 in 2014 (the year after the company exited the merchandise leasing market in the United States) to 165 last year, made up of 134 corporate stores and 34 franchise locations across the country. It’s monthly potential lease revenue also fell in 2018 – to $9.1 million, down 3.6% from $9.5 million the year before.

There’s only one way to go
Steven Poole, GoEasy senior vice president of operations and merchandising, firmly believes Easyhome has bottomed out – or, as he put it, stabilised. But more importantly, he waxes enthusiastically about its future.

“My sole responsibility is Easyhome – to make sure Easyhome continues to thrive,” he told Home Goods Online in an interview. “And we’re coming off our best year in about ten years. And in the fourth quarter, our same store sales were up 7%.”