It is located on the lower floor of what was previously this city’s largest Sears Canada store, which closed in December 2017, a few weeks prior to the department store chain’s complete demise. It also replaces an 11,000 square foot store at the corner of Portage Avenue and St. James Street.

“EQ3 is proud to open our first ever Canadian flagship store here in Manitoba and serve the community that has helped shape who we are through the expansive possibilities of this space,” EQ3 founder and chief executive officer Peter Tielmann said in a statement. “Our uniquely Canadian approach to design is deeply inspired by our hometown of Winnipeg, so we’re honored to share this work with customers, friends, and family at our new showroom.” 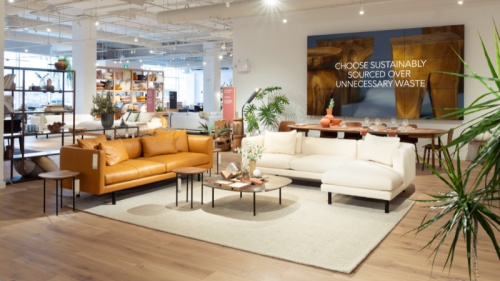 Described by company insiders as “alluring,” the showroom brings to life everything quintessentially EQ3 with the addition of the occasional unexpected element. The architecture and interior of the store pairs references to the Prairies with elements of warmth, incorporating features of herringbone flooring, traditional wainscotting, and pastel millwork.

“With our foray into experiential retail, we’re taking a holistic approach to transform how people reimagine their homes,” Peter Tielmann said. “We’ve created pockets of discovery in the store giving customers space, tools and even nourishment, while they take the time to physically interact with the products and personalize designs.”

To mark the opening in its hometown, EQ3 is working with new brands, such as Global Trunk, OMY, The Dough Project, QWOO, Alessi, and Silk & Snow, to merchandise its kids, pets, and plants sections of the store, which are unique to the Winnipeg location.

Palli Home + Company
The flagship store is also serving as the launch point for EQ3’s new concept product collection, Palli Home + Company, which includes furniture, rugs and accessories. The line features larger pieces of furniture with an emphasis on functionality and durability.

As with the core EQ3 collection, all the upholstery items are manufactured in Winnipeg. The collection will be available at all EQ3 stores and online by early 2022.

“The new Palli Home + Company collection is made for modern living,” EQ3 chief design officer Enri Tielmann said. “Designed to create endless solutions for unique environments, the upholstery collection combines modularity and function, complemented with playfulness and ease of care. Sectional configurations can be configured, reconfigured, expanded, reduced and mirrored. All made with materials and craftsmanship of the highest quality featuring sustainable performance covers combined with feather and memory foam comfort.”

Part of the Palliser Furniture Group, EQ3 is a vertically integrated designer, manufacturer and retailer of home furnishings based in Winnipeg. It operates 16 stores in North America, including five in the United States.