TORONTO – Over the past decade-and-a-half, the furniture industry has had to grapple with a global economic meltdown, an e-commerce explosion and two years’ worth of rolling COVID-19 lockdowns that forced most brick-and-mortar retailers to close for weeks or months at a time.

With the world still on shaky ground, it might seem an odd choice to open a mattress store in Canada’s biggest city (especially since that city was locked down longer than most other major metropolitan areas over the past two years), but David Owen, the founder of Dozy Mattress, is happy to take a chance on bustling Queen Street West.

“We’re in the right area,” Owen told Home Goods Online, adding his store is located near a plethora of popular shops (including other home goods retailers). 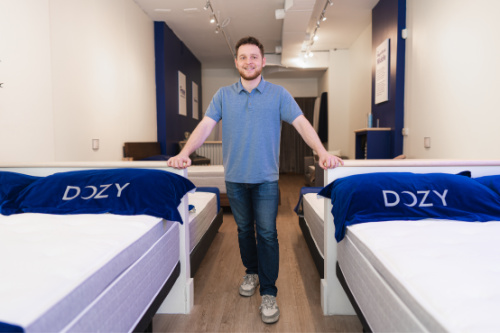 “Aritizia, Zara, Adidas, Footlocker – all of these guys are my neighbours. It took a while to get here, but finally I’m here and people seem to like the store and what I’m selling.”

While Owen, 24, comes from something of a furniture family, he founded Dozy Mattress on his own five years ago and operated the growing brand out of a strip mall as well as a store in this city’s suburb of Etobicoke and a downtown office building before settling on his current location.

“Right out of high school, I opened up a store,” he says, adding while he initially wanted to study culinary arts, he decided he had gleaned enough about the furniture industry from his father to feel confident about selling mattresses. “Dozy isn’t a family business but if it wasn’t for my family, I wouldn’t have opened my store.”

Owen does indeed have furniture and mattresses in his blood. His grandfather is Hugh Owen, who founded mattress maker Owen & Company – the original Canadian licensee of the Kingsdown brand – after a long and distinguished career in the industry in 1995.

While Owen never worked at Owen & Company (which is now owned by the Montreal-based investment firm Novacap), he did spend some time working at City Mattress, an independent sleep retailer based in Mississauga operated by his father.

“Kingsdown ended up ballooning so much,” Owen says. “It’s now sold and it doesn’t have anything to do with my family anymore, although my uncles are involved at the higher levels. I’m hoping to follow in the footsteps of my grandfather with my own brand.” 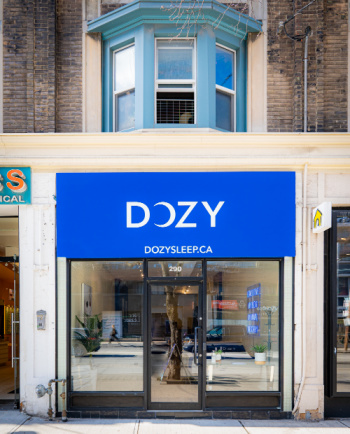 After graduating high school, Owen decided to set up shop at Improve Canada, a home improvement and renovation-focused shopping centre in Vaughan, a northern suburb of this country’s largest city. After he found space to lease, he got to work on building a web site with the Toronto-based web design company A Nerd’s World. While he always intended to operate a physical store, Owen knew the e-commerce side of his business had to be on point.

“I had to quickly learn about e-commerce and selling mattresses online,” he says.

Eventually, Owen decided to move Dozy to the second floor of an office building in Adelaide and Spadina area in Toronto’s downtown core. When COVID hit, a space on the ground floor of the building opened up and Owen moved Dozy to the street-level location.

“I had a great Google pin drop and if anyone Googled ‘mattress,’ we’d come up right at the top,” he says, adding that he also briefly had another location on The Queensway in Etobicoke. Although Owen loved the Adelaide and Spadina location, he was forced to move when the building was slated for redevelopment.

“Queen Street had been hit hard. People weren’t travelling downtown like they used to. A lot of landlords on Queen were worried, so I got kicked out at the perfect time because there were a lot of vacancies.”

As far as products go, Dozy is unique in the sense it doesn’t just sell a mix of compressed (that is, bed-in-a-box) and higher-end mattresses so it sells pieces made entirely in Toronto to mostly local consumers.

Customers can choose from the Davisville (good), the Summerhill (better), the Richmond (best) as well as two entry level or promotional mattresses, named the Essential ($299) and the Osgoode ($379).

“The foam and the coils are all made right here in Toronto. All the infrastructure to make a mattress is still here because it hasn’t been fully outsourced,” he says, adding he worries the popularity of rolled up mattresses could prompt more companies to start producing them overseas.

“Now you can shrink a mattress down to the eighth of the size, and you don’t know what kind of impact that’s going to have in 10 years. All the factories – Carpenter, VitaFoam, etc. – are still here now, though. There are really great parts in Toronto.”

And while Dozy products can be shipped anywhere, Owen is hyper-focused on GTA consumers. “We can sell in Vancouver, Calgary, wherever you are. But right now, we’re not targeting people outside of Toronto and the GTA at this time.”

Owen says the focus on local consumers allows Dozy to deliver goods quickly. “Customers can come into the store or buy online and local delivery time is two to three days. We even have them in store for pickup,” he says, adding when Dozy eventually expands its operations in the future, it will do its best to recreate the Toronto model in other cities.

As far as feedback goes, Owen says people are responding positively to the new store. “Everybody loves it, we’ve got great traction. We’ve got people taking photos of our signature neon sign (which quotes Drake’s famous ‘I only love my bed and my momma’ lyric). We’ve created a nice little spot.”

“As of now, we’re busier than ever. Busier than last year and the year before that. We're off to a good start here and I’m lucky to say that.”