On May 25th, police officer Derek Chauvin murdered George Floyd in the streets of Minneapolis. Ironically, the slogan (brand promise) of the Minneapolis police department is, To Protect with Courage.  To Serve with Compassion. Derek Chauvin showed neither courage nor compassion. During his 18 years of service, he had 18 complaints filed against him for inappropriate behavior. And yet, he was allowed to remain in the job. Was this a failure of leadership or a policeman’s union that prevented management from weeding out bad apples?

Murder is defined as an unlawful death deliberately inflicted on one person by another person. The definition fits here.

More than 400,000 people are murdered around the world each year. But this murder of one black man, in handcuffs, clearly captured on video has saddened, appalled and angered good people of all colours, ethnicities and backgrounds. And so it should.

Global injustice and inhumanity should surprise no one. Since the beginning of the human journey on this planet we have a miserable track record of brutality to one another based on race, religion, gender, fear, greed or the quest for power that has left us with a legacy of institutionalized mistrust, resentment, hatred and violence.

While there’s lots of kindness in the world and many extraordinary people are committed to doing the right thing, history shows that, generally speaking, we humans suck at getting along. We need to do better. Much better! But it’s tough to change minds and hearts. It’s tough to heal history!

I sense we’re at a crossroads here. If Derek Chauvin and the other three officers who did noting to stop the murder of George Floyd are not found guilty and appropriately sentenced, America, with all the world watching, will have lost what little moral high ground it may still have. Third degree murder won’t cut it. Now is the time for thoughtful and courageous leadership, real justice and an ongoing commitment to be better and to do better.

At the same time, looters and arsonists should not get a free pass from the police or the media. They’re thieves and thugs hijacking a black man’s tragic death as an excuse for their crimes. 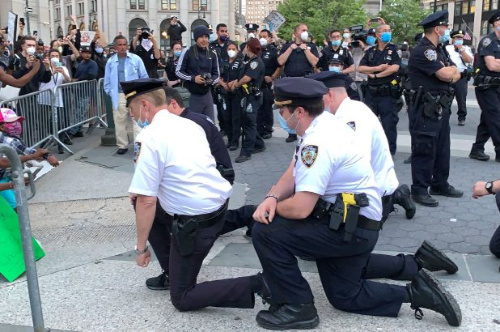 On a recent Friday evening, Keisha Lance Bottoms, mayor of Atlanta, spoke passionately to her city and to America in one of the most powerful and moving speeches you’ll ever hear, on any subject. In this speech, referring to the looters and arsonists in her city, she said, “We’re better than this. Atlanta is better than this. America is better than this.” That remains to be seen. (Click here to see and hear her speech.)

In many cities across America, front-line police officers ‘took a knee’ to take a stand. They went down on one knee to talk with demonstrators, to listen to their pain, to be in solidarity and to stand for justice. The result in those communities was much more respect and much less destruction.

As business owners, leaders or managers, what can we learn from this? Here are four important business take-ways from this terrible mess:

Get rid of toxic troublemakers or people who can’t deliver your brand promise or honour your culture. Failure to deal with toxic employees or non-performers is one of the biggest problems in many businesses today. Get your documentation in order, then invite them to move on.

Your team and your customers want to be heard. They know stuff and they hate it when you don’t ask. Listen to them. Get down on one knee, be humble and listen. Be the ‘chief listening officer’ in your business or department. When we listen to others, two things happen – we learn from them and we honour them.

Encourage diversity, fairness and respect for others…and have zero tolerance for bullying. Make your business or department a safe place for top performers and those with potential, regardless of their ethnicity, gender or background. Research, as reported in Forbes Magazine, shows teams that include a wide range of ages, genders and backgrounds make better business decisions 87% of the time.

Compensate, reward and acknowledge fairly. Which team members in your business or department have been left behind financially or in career opportunities because of gender or background? Who has been too busy doing their job to play career politics or suck up to the boss? What needs looking into?

That’s it for this week. Stay calm. Live brilliantly. Do at least three important or kind things each day!