WINNIPEG – DeFehr Furniture, one of this country’s oldest and largest case goods manufacturers, has announced it will shut down this coming August, a victim of the COVID-19 pandemic and the crisis in the global supply chain which has led to rising prices for raw materials.

“This wind down will be carried out in a controlled and orderly manner, and all obligations to suppliers and employees will be honoured as we work to complete and fulfill customer orders on hand,” the company said in a statement posted on its web site.

“The decision to cease operations was the result of severe supply chain disruptions and raw material sourcing challenges over the past two years, combined with balancing the pace of price increases that were passed along to customers,” the family-owned manufacturer explained, adding, “Many of Defehr’s raw material inputs are not only purchased by furniture manufacturers, but other home and building product manufacturing companies also compete to secure the same raw material inputs, which exacerbated supply shortages and have resulted in disruptions to production runs.” 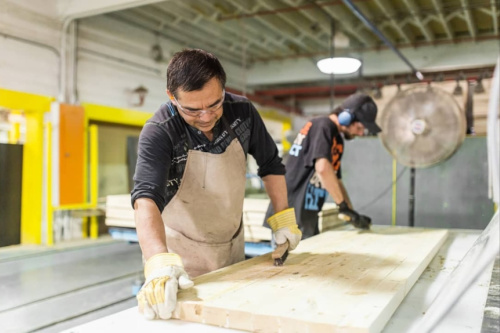 Company president and cheif executive officer Andrew DeFehr told the local CBC News outlet late last week the pandemic and the supply chain issues that resulted are the primary reason for the decision to shut down operations.

“It’s kind of that perfect storm, where you have just too many things close together that led up to this happening,” he was quoted as saying. “It’s not easy as an owner having to tell 200-some people that the business is shutting down.”

DeFehr Furniture was created in 2004 when it was spun off from Palliser Furniture and sold to Frank DeFehr, brother of the latter’s chairman, Art DeFehr. It expanded in 2006, when it acquired Palliser’s Logic division.

The company – which manufactures bedroom, entertainment, dining and occasional furniture to more than 200 retailers across North America – focused on supplying those organizations capable of buying container loads of product, maximizing margins for the retailer and cost efficiencies for the factory.

Andrew DeFehr told CBC that over the years the company struggled with slim profit margins, but when it entered the hospitality segment about a decade ago – providing furniture for hotels – things got better.

Serving the hospitality segment evaporated when the pandemic was declared, which was compounded in recent months by disruptions in the supply. In fact, the plant shut down for four days last month because it didn’t have handles.

“At some point, you just say, I don’t know if I have enough gas in the tank to try one more time," Andrew DeFehr told CBC. “It’s been an emotional kind of roller-coaster ride for the last, probably, six months to 12 months.”

The company said it has a skilled workforce of 224 employees who will be offered support programs to help them through the transition. The factory, located at 125 Furniture Park in Winnipeg, is expected to close on August 10, 2022.