OTTAWA – After two months of record-breaking declines, the Index of Consumer Confidence reversed course to edge slightly higher in May, the Conference Board of Canada reported late last week.

“While the increase is certainly good news, the tepid gain shows the households across the country remain cautious about the economy and this will weigh on purchasing decisions over the coming months,” board economist Anna Feng pointed out on her commentary.

The board said, the consumer confidence index climbed 16.2 points in May, after hitting the lowest-ever recorded mark of 47.6 in April (the index was set at 100 in 2014). It now sits at 63.7, slightly higher than its trough (56.3) during the 2008 financial crisis and a significant improvement over the prior month.

In addition to housing starts and sales, consumer confidence remains one of the primary drivers of furniture, mattress and major appliance sales in Canada. The other is household debt.  The uptick seen in May was seen across most of the country. 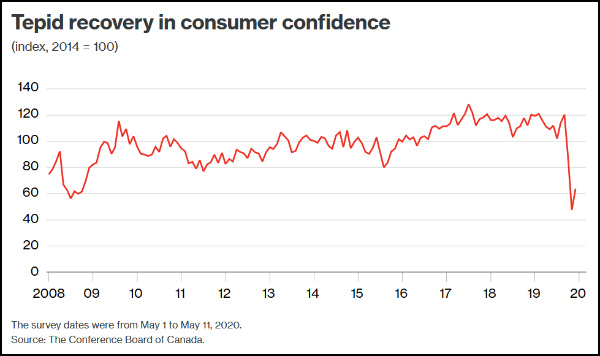 “Consumers felt more confident in May compared to April across all regions in Canada,” Feng said. “Atlantic Canada posted the largest monthly increase among provinces (up 21.7 points), while the Saskatchewan-Manitoba region recorded the smallest gain (up 9.5 points).

“As governments announce plans to relax restrictions and slowly reopen the economy, Canadians are feeling more optimistic about the impending economic recovery,” she continued, adding, “However, without a clear timeline on the return to normalcy, the rebound this month was tepid with the index still down nearly 60 points since February, before the lockdown.”

The report noted Canadians remained concerned about their financial situation six months from now. While the share of these feeling pessimistic about their future finances dropped to 23.2% in May, this proportion ranks as the second highest in history following the record-breaking 36.1%.

“With recent large swings in oil prices leaving Alberta’s economy on shaky ground, it is not surprising that its residents worried the most about their future financial conditions. More than 30% of Albertans expect to be worse off financially six months from now,” Feng said.

Canadian consumers are also still concerned about future job prospects. While the number declining slightly from April’s survey, the board noted that at 52.2%, its still twice as high as its long-term average (24.1%) – with residents of Alberta and Ontario topping the list.

Quebecers are particularly concerned about their future economic and labour market conditions – it is the only province where positive responses to questions about future finance and jobs dropped this month.

“While most Canadians are slightly more optimistic about the future this month, many still do not feel that this is a good time to make a major purchase,” Feng said, noting that in British Columbia, 75.4% of respondents believe now is a bad time to make a major purchase – such as a house, car or furniture – which is higher than the peak (71.3%) reached during the 2008 financial crisis.

"Overall, this month’s rise in the consumer confidence index reflects Canadians’ improved optimism about the future. Nevertheless, the index remains significantly depressed by historical standards, suggesting that consumers will remain cautious with their spending over the coming months,” Feng concluded.