OTTAWA – As the fourth wave of the COVID-19 pandemic causes provincial governments to postpone re-openings and implement new restrictions in a bid to curb its advance, Canadian consumers are saying, to a much greater degree, now isn’t the time to make a major purchase such as a house, car or furniture and appliances. That’s the conclusion of the latest edition of the Index of Consumer Confidence published by the Conference Board of Canada, a private think tank based here.

Board economist Anna Feng reported last week that after dropping 7.7 points in August, the index fell another 3.5 points in September to 110.0, its first consecutive decline since March 2020. The index was set to 100 in 2014 and was set at 121 in February 2020, just prior to the start of the pandemic.

The new measures, including the proof-of-vaccination systems and mandatory mask policies, may not be as stringent as those in previous waves, Feng noted Canadian concerns about the future intensified this month, especially in Ontario, Quebec, and British Columbia.

“Despite the recent pickup in wages, Canadians’ confidence in their future finances retreated again this month,” she said in her report. “The share of negative views on the question of future finances grew more than any month since April 2020. Many households have felt their purchasing power weaken as inflation keeps running hotter each month and reached its highest growth over the past 18 years in August.” 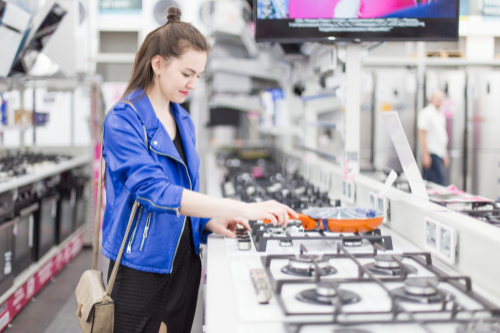 She noted optimism in future job prospects continued to trend downward from its all-time peak of 36.2% in June 2021. “But at 25.6% it still surpasses any pre-pandemic high,” she continued, adding, “This suggests that Canadians are still optimistic that more job opportunities will come back six months from now.”

Concerns over finances have eroded consumer confidence about spending this month. “Only 18.9% of survey respondents believed now is a good time to purchase large-ticket items, falling below 20% for the first time since June. Sentiments on major spending still have a long road to recovery compared with the average sentiment of 31% in 2019,” Feng said.

“The decline in September’s consumer confidence index reflects Canadians’ caution in the face of the fourth wave,” she continued. “Concerns over future finances and employment mean that the average Canadian will likely hold back on spending and save more for a rainy day.”

Feng also believes as COVID-19 cases continue to rise, consumer confidence is likely to trend downward in the near term. “Stretched health care capacity and rising hospitalization rates may force other provinces to implement stricter restrictions. Any further tightening in restrictions will further weaken consumer confidence and delay the economic recovery,” she said.

The six regions included in the index showed varying degrees of consumer confidence, each driven by a number of factors.

For example, the index in Ontario declined by 8.3 points, the second-largest monthly drop among provinces this month.

The board pointed out it has been more than two months since Ontario moved into the third step of its reopening roadmap but escalating COVID-19 cases have postponed any plan to remove restrictions in the near term. Instead, starting on September 22, residents are required to show proof of vaccination to access non-essential services.

“Ontarians are concerned about what their future might look like under the new wave – sentiments on both finances and future job prospects deteriorated this month,” Feng observed. “As such, only 18.1% of survey respondents believed that now is a good time to spend on major purchases, the lowest share of optimism among regions.”

In Quebec, the index dropped 3.3 points, following last month’s plunge of 19.0 points. The index now sits slightly above its level seven months ago.

Before Quebec implemented its vaccine passport system on September 1, muted job growth in the past two months had aggravated anxiety about the fourth wave.

Feng noted Quebeckers felt rising pressure on their current finances in September and those expressing positive sentiments on this question logged their largest monthly drop over the past year. “Sentiments about the future also stalled, as a result of mounting uncertainty about the duration of the fourth wave. As such, it’s not surprising that Quebec has the highest share of pessimism (62%) on the question of major purchases among regions this month,” she said.

Meanwhile, the Alberta index inched up 1.0 point, following a 15.2-point plunge in August.

“As Alberta has the lowest vaccination rates among regions, the province was hit hard by the fourth wave,” Feng observed, noting, “COVID-19 cases almost exceeded the peak reached during the second wave by mid-September. As a result, the province had to tighten restrictions again this month to slow the spread of the virus.”

In turn, this has led to growing fears about the fourth wave have eroded confidence about the future, despite improved sentiments on current finances. Almost 24% of survey respondents believe there will be fewer jobs six months from now, the highest share of pessimism in Canada.

“The sentiment on major purchases also deteriorated, with the share of pessimism on the question rising to 50.6% per cent, up from 43.7% last month,” Feng said.

The index in British Columbia plunged 14.3 points, wiping out gains over the past four months. As COVID-19 cases climbed, B.C. tightened restrictions on group gatherings and implemented a vaccine card system, increasing consumer concerns about the future.

With lowered expectations about future finances and job prospects, B.C. residents are more cautious about spending. “At almost 52%, the province logged the second-highest share of pessimistic views on the question of major spending,” Feng said.

By contrast, the Saskatchewan–Manitoba index climbed 6.3 points, following two consecutive months of declines. The improvement came mainly from increasing confidence about future job prospects, even though concerns about the fourth wave have escalated leaving consumer in the region less confident about their finances.

“As such, an increased share of people (49.6 per cent) believed that now is a bad time to buy large-ticket items,” Feng said.

The index for the Atlantic Region surged 18.1 points, the largest monthly increase among regions this month. This was driven by high vaccination rates and relatively low COVID-19 case counts.

Canadian consumers here seem increasingly optimistic about their financial conditions and future job prospects. The region also logged the highest share of positive views (21.8%) on the question of major purchases across provinces this month.